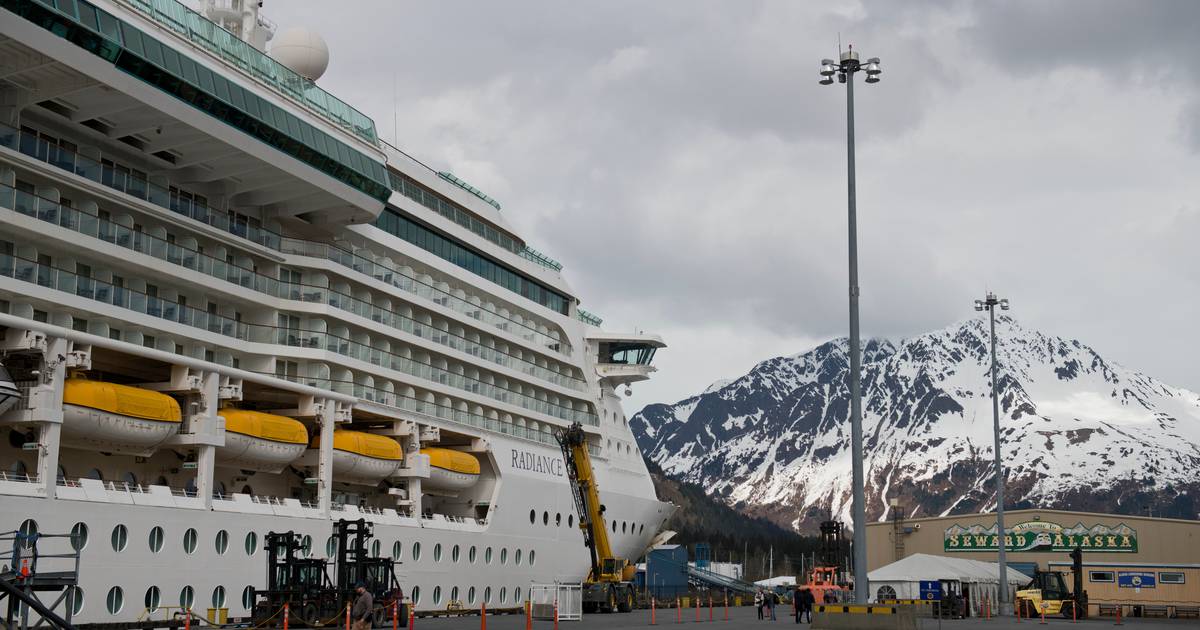 The Alaska Railroad plans to spend $80 million to replace and expand the old cruise ship dock in Seward, setting the stage to bring bigger cruise ships and more tourists to Southcentral Alaska . A $25 million freight dock expansion is also underway.

The new wharf will stretch nearly a quarter of a mile into Resurrection Bay, about 500 feet longer than the existing wharf that needs to be replaced due to its age, railroad officials said.

The longer dock will allow cruise lines to bring in ships that can carry about 4,500 passengers, more than the roughly 2,500-passenger ships that currently reach Seward, said Bill O’Leary, president of Alaska Railroad.

These large vessels are currently visiting southeast Alaska, but they are not crossing the Gulf of Alaska to visit south-central Alaska, he said.

O’Leary said the bigger ships would mean more visitors not just for Seward, but for destinations such as Anchorage or Fairbanks, he said.

“This is a critical project not only for the cruise industry, but for the entire visitor industry in Alaska,” O’Leary said.

Seward business and political leaders said they support the plans. But the prospect of a larger footprint for the cruise industry is prompting some residents of the town of 2,800 to watch developments closely.

[Earlier coverage: Tourists and cruise ships are ready to return to Seward. But is Seward ready for them?]

The project will mostly be completed in two summers and finalized in 2025, according to railway officials.

The upgrade to the cruise ship wharf is part of a larger effort to modernize railroad infrastructure in the community. An expansion of the freight wharf is planned, which will be completed in 2027.

The docks are vital transportation links for the state, O’Leary said. He said the improvements will also support industries such as construction that send materials to Seward for distribution throughout Alaska.

“His a significant amount of money for a city of this size and for a railroad of our size,” O’Leary said.

The heart of the plan is the replacement of the passenger platform. It was originally a freight wharf, built in 1966 as the railroad modernized its facilities after the Great Alaska Earthquake two years earlier.

The wharf is still safe, but its pilings are corroding, said Clark Hopp, the railroad’s chief operating officer. It exceeded the standard design life for a marine project.

“It’s served us well,” Hopp said. “But as we like to say at the railroad, it’s in palliative care. He will die.

The railroad is working on an agreement with Royal Caribbean for that cruise line to serve as the long-term anchor tenant of the new wharf, O’Leary said.

The dock expansion will support Royal Caribbean’s plans to bring its new Quantum-class ships to Seward, she said. The ships are larger and more energy efficient than previous ships, she said. Two of the ships visiting the Southeast this year are the 4,900-passenger Quantum of the Seas and the 4,200-passenger Ovation of the Seas.

Alaska and Seward are popular with guests, she said.

“Our business has a strong interest in expanding into Alaska,” she said. “Our customers love the destination.”

In 2019, approximately 230,000 people landed in Seward. They were among 1.3 million cruise passengers to visit the state that year.

Industry officials said the statewide record could be broken this year, after major cruise lines faced two years of no-to-limited calls in Alaska during the pandemic of COVID-19.

[Tourists are returning to Alaska this summer. Will there be enough workers to manage them?]

As part of the passenger dock expansion, the railroad is also planning a new terminal, where cruise passengers congregate as they prepare for their overland journey to Alaska.

If necessary, the railroad will seek to increase its capacity to carry more guests from Seward to Anchorage and elsewhere, O’Leary said.

The Alaska Legislature advanced the cruise dock project this session, approving a bill for a $60 million bond.

The railroad will cover the rest of the cost in cash, according to railroad officials. Bonds will be repaid over time with dock usage fees.

Seward is largely excited about the opportunity to have more visitors to the community and the port’s upgraded facilities, said Kat Sorensen, manager of the Seward Chamber of Commerce and Visitor Center.

“It will be a boon for Seward in general,” she said.

Trent Gould, owner of Kayak Adventures Worldwide, a local kayak guiding company, said he’s worried that ever-larger cruise ships will take away from the charm of the small town of Seward.

“As a tour operator, we recognize the importance of tourism and we want to manage it in a sustainable way, with people having a say in this growth,” he said. “When cruise ships come in, those values ​​don’t always match.”

While some cruise lines will spend time in Seward, she said the community can adapt to any work issues or other complications that may arise.

One benefit is that larger cruise ships, if they come, will create more work for the local stevedores who support them, she said.

“I have no concerns about what they’re coming up with,” she said of the railroad’s plans.

As for the railroad’s plans to expand the freight wharf at Seward, its size will more than double after it is widened and lengthened. It will be approximately 1,000 feet long when completed.

The cargo wharf expansion is part of a $25 million project, most of which a 2020 grant from the U.S. Maritime Administration pays for.

The expansion will allow for more efficient movement of cargo arriving in Seward, such as fracking sand and pipes for the oil industry, officials said.

The railroad says it will focus on building the passenger platform first, then the freight platform.

The phased approach is necessary in part to avoid disrupting cruise ship activity in the summer, railway officials said.

What does a Harmony of the Seas cruise look like?