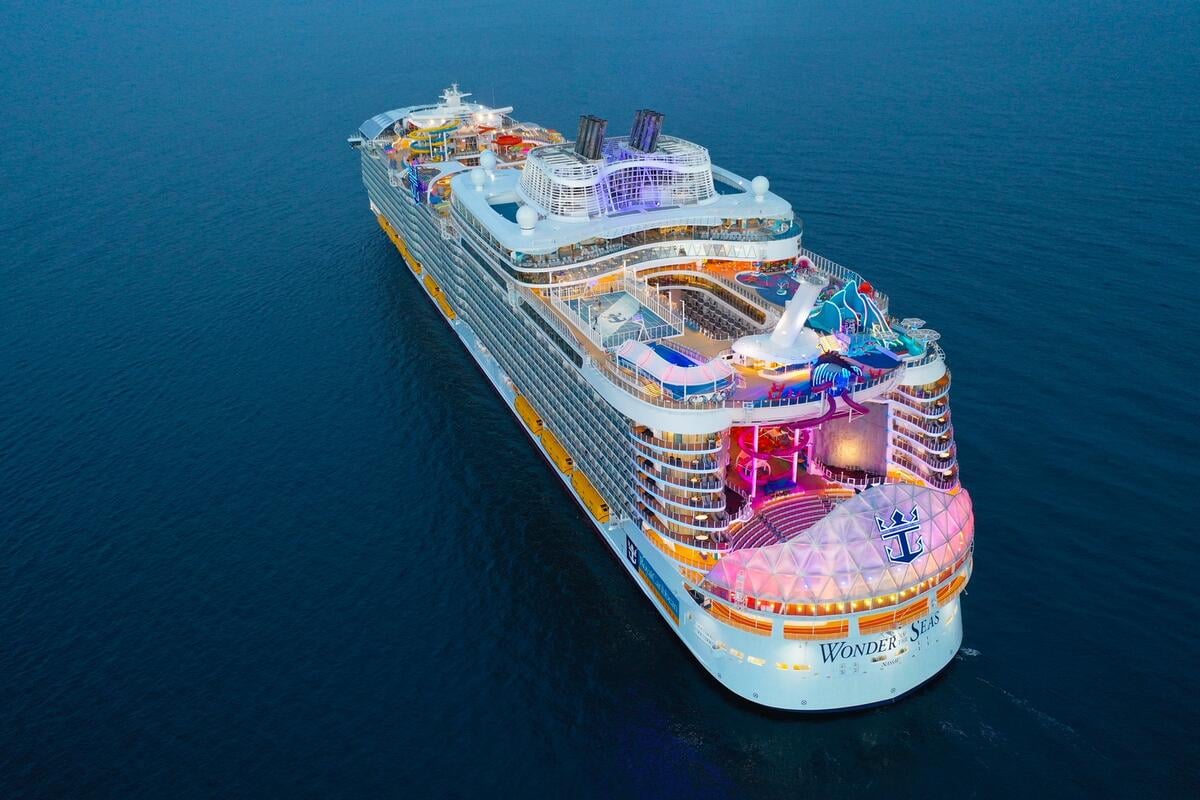 Royal Caribbean’s Wonder of the Seas is one of the largest cruise ships in the world, so how does it compare to the most famous ship of all time?

The Titanic is more than likely the most famous ocean liner due to its famous accident in 1912. Its sinking has never been eclipsed in the public imagination, despite decades of larger and safer cruise ships.

Nevertheless, if you mention cruise ships to someone who is new to cruising, inevitably Titanic references usually follow. So if your benchmark for understanding what a cruise ship is based on a ship that sailed over 100 years ago, here’s a look at the difference between today’s large ships.

Meet Wonder of the Seas

At around five times the size of the Titanic, the world’s largest cruise ship is Royal Caribbean’s Wonder of the Seas.

Spanning 18 decks, Wonder is the fifth Oasis-class cruise ship to be launched.

Size is everything with Symphony, as she is 1,188 feet long. If you were to put it upright, it’s almost as tall as the Empire State Building (1,250 feet without any antenna).

Getting around the ships is quite easy, thanks to the neighborhood concept that Royal Caribbean has developed for these ships. There are eight quarters inside the ship to help distinguish areas from each other and simplify navigation for guests.

Read more: Interesting Facts You May Not Know About Wonder of the Seas

How big was the Titanic?

The Titanic was a large ship for its time, reaching 882 feet 9 inches in length and encompassing 9 decks.

Titanic was the largest ship built up to that time.

Comparing Wonder of the Seas to Titanic

In terms of gross tonnage, the Titanic doesn’t even make the list of the 64 largest cruise ships in the world by gross tonnage.

Ditto for the length; Of the 64 largest cruise ships in the world today, the “shortest” ship comes in at 984.1 feet with the AIDAprima and AIDAperla.

The Titanic was built at an estimated cost of $7.5 million in 1912, which in today’s dollars would cost around $400 million.

Wonder of the Seas cost $1.35 billion to build.

Titanic can accommodate 2,453 passengers, while Wonder of the Seas has a capacity of 5,734 passengers based on double occupancy.

In terms of things to do on each ship, Titanic offered a heated swimming pool, gym, squash court and Turkish bath.

Wonder of the Seas has 25 swimming pools, a FlowRider surf simulator, two rock faces, a life-size basketball court, an ice rink, mini-golf and a carousel.

In the evenings, Titanic would feature smoking rooms, billiards, music and dancing.

How much is a ticket for Titanic vs. Wonder of the Seas?

Any cruise fan knows that there is no standard price for a cruise. Cruise fares vary from ship to ship and even from sail to sail.

It’s not unreasonable to shell out around $2,000 for a two-person balcony stateroom on Wonder of the Seas.

Unlike modern cruise ships, the Titanic had different fare classes. First, second and third class, which were distinguished by social status and ticket cost.

First class was reserved for the wealthiest and most important passengers. They were upper-class people, who had careers in business, politics, the military or industry. It was the well-to-do and best-known people who sailed.

The second class was essentially the middle class, which could include tourists, clergy, and educators.

The third class (sometimes called steerage) was mostly made up of immigrants moving to North America.

How do these ships compare?

In short, Wonder of the Seas and Titanic don’t have much in common besides being ocean-going ships. Today’s cruise ships are very different from ocean liners, like the Titanic.

What many people new to cruise ships don’t understand is the fundamental change that pleasure cruising experienced in the second half of the 20th century. Ocean liners and ferries evolved into the cruise ships we know today.

Ocean liners were mainly used to bring passengers across the ocean from one point to another, while cruise ships made pleasure trips, closer to the coast, sailing between ports.

Unfortunately, many cruise newbies have the Titanic as their only frame of reference when it comes to non-cargo ships, so it ends up being the de facto benchmark.

Not only are ships like Wonder of the Seas immensely larger, but the onboard experience is vastly different, with more to see, do and eat than the Titanic could ever have dreamed of.

What is a Royal Genie on Royal Caribbean?