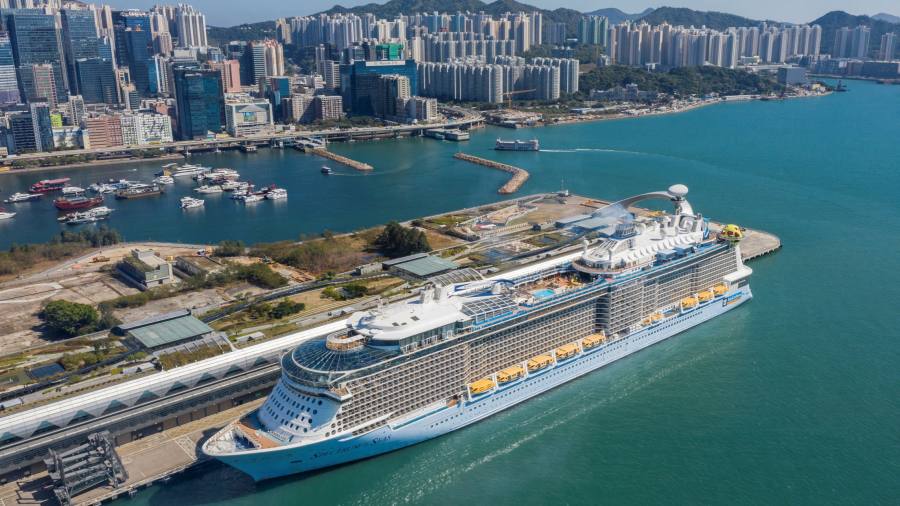 Jessi Chen “had the best time” when she hosted her bachelorette party with around 50 friends on a “cruise to nowhere” trip to Hong Kong a year ago.

“It was really fun,” the business executive, in her 30s, told the Financial Times of her trip aboard Dream Cruises’ 1,674-cabin Genting Dream, a round trip three days in international waters and then back to Hong Kong. It was her first time on a cruise ship in Asia, and she enjoyed it so much that she looked forward to another trip at a time when international travel was virtually impossible due to Covid-19 restrictions.

But then authorities also suspended cruises to nowhere. Hong Kong as well as mainland China, with its commitment to zero-Covid, has been all but abandoned by international cruise lines and Chen may have to wait months before being able to sail from the port of Victoria again.

As global cruise bookings reach pre-pandemic levels, analysts and industry insiders have said a sector recovery in China and Asia could only begin after 2024, given that ocean liners usually plan their operations a year or more in advance.

Carnival’s Costa Cruises, which had a strong presence in Asia with a quarter of its fleet stationed in the region, suspended sailings due to uncertainties surrounding a rebound in tourism. Norwegian Cruise Line and MSC Cruises no longer deploy ships to the region, while Genting Hong Kong, which operated Dream Cruises, went bankrupt this year.

Royal Caribbean bases only one of its cruises, the 2,137-cabin Spectrum of the Seas, in Singapore as its home port, as its former port of Hong Kong only lifted cruise restrictions in October.

The Asia-Pacific region, thanks to a rapidly growing Chinese market, accounted for up to a fifth of global revenue for major cruise lines before 2019.

But the pandemic has caused passenger volumes in Asia to plummet by 3.7 million to 626,000, according to Cruise Lines International Association, an industry body. Passenger numbers in mainland China fell 99% to just 6,000 last year from nearly 2 million in 2019.

Cathy Hsu, a professor at the School of Hospitality and Tourism Management at Hong Kong Polytechnic University, said it could take another two to three years for Asia to experience a post-Covid rebound.

“A full recovery to the pre-pandemic level [in Asia] will be difficult without the continent [Chinese] tourists,” Hsu said. “As long as there are political uncertainties, international cruise lines will most likely stay away from making commitments.”

Hopes of easing travel dimmed after China’s Communist Party reaffirmed its commitment to its rigid zero-Covid policy last month at its national congress. Hong Kong’s borders are still not fully open, with all incoming travelers barred from restaurants, bars and clubs for the first three days of arrival.

The Chinese Territory’s Kai Tak cruise terminal in Kowloon, which once hosted the region’s largest cruise ships, has been turned into a 786-bed government quarantine facility. Jeff Bent, managing director of Worldwide Cruise Terminals, which manages Kai Tak, expected “it will take a few years before we get back to the same breadth of cruise lines we had in the past.”

Trey Hickey, a former senior Carnival executive, told the Financial Times that most major cruise lines focus on their core domestic businesses in Europe and the United States rather than emerging markets such as Asia in the middle. of the “financial and reputational damage the industry has suffered”. .

Cruise lines including Carnival had to refinance large amounts of corporate debt after borrowing heavily amid the pandemic, while the industry suffered damaging publicity when passengers were trapped on cruise ships invaded by Covid at the beginning of the epidemic.

But Hickey thinks companies that stay engaged in the region could be rewarded.

Silversea Cruises, operated by Royal Caribbean, has planned Asia cruises that will call in Hong Kong in early 2023, although they will not stop at mainland Chinese ports. Norwegian Cruise Lines has announced that it will bring one of its cruises, the Norwegian Jewel, back to Asia from October next year.

“The scale and potential of the Chinese market is not diminished” when it finally opens up to the world, said Brian King of Texas A&M University. But, he added, “there is a need to rebuild trust and faith.”

According to Chen, the business leader, cruise ships should tap into a younger clientele, who have taken a liking to life at sea when all other leisure travel was banned.

But Royal Caribbean, which saw its Asia-Pacific share of global revenue fall from around 15% in 2019 to just 9% last year, told the FT it had “no idea when where we will resume service in mainland China.” .

“China is the engine of growth. . . and is now the only market with no return to service,” the company said. “Hopefully that will start to change in 2023.”