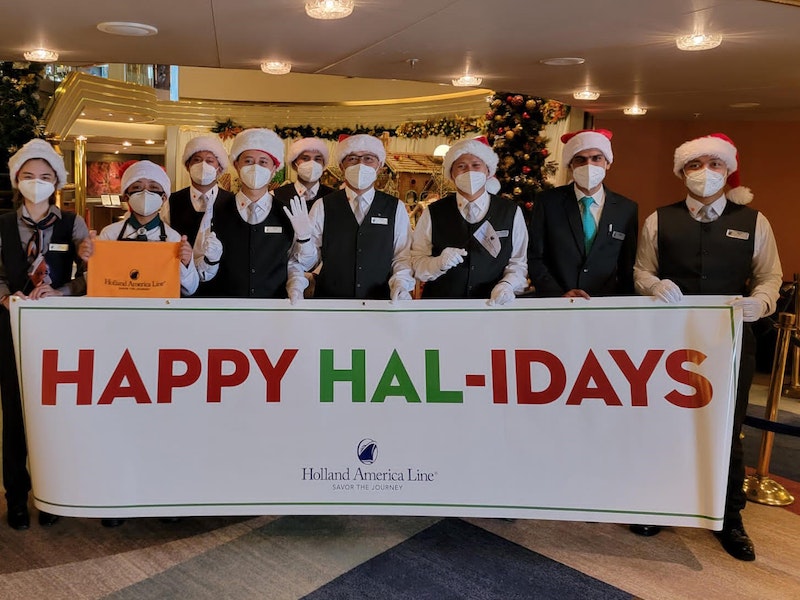 Cruise ships Zuiderdam, Norwegian Pearl and Enchantment of the Seas resume service in time for vacation

This is a positive sign in plans to restart the cruise industry, even as the omicron variant of COVID-19 continues to create uncertainty in the near term.

The Zuiderdam, built in 2002 by Holland America Line, was returned to service from San Diego today, becoming the second ship to resume operations there since the restart from Koningsdam on October 10.

To commemorate the special occasion, Holland America has gone out of its way, reigning over Santa Claus and his elves to be on hand for the boarding of the ship’s first passengers for almost two years. Passengers boarded Zuiderdam bound for the Mexican Riviera to the sound of bells. Zuiderdam is on a 10-night Mexico and Sea of â€‹â€‹Cortez vacation itinerary, with transit through the Panama Canal and a 35-day â€œstay in the South Pacificâ€ to follow.

â€œSan Diego is an important home port for us, and we are delighted to have two vessels in full-time operation here with the restart of Zuiderdam today,â€ said Gus Antorcha, president of Holland America Line. â€œWe are proud to be a part of the San Diego community, which has continued to provide tremendous support throughout our reboot. There is no better way to kick off the Zuiderdam season than with a cruise a vacation full of happy guests and our grateful crew who are happy to find them on board. â€

Holland America has long made San Diego its winter home port, with a presence in the city dating back to the 1990s. From the city, Holland America offers passenger cruises to Hawaii, the Mexican Riviera, the Panama, the South Pacific and trips to the Pacific Coast to and from Vancouver, Canada. It plans to bring 81,000 passengers to San Diego during 2022 and inject some $ 35 million into the local economy.

With the restart of Zuiderdam, Holland America has now returned six ships to service, including the all-new Rotterdam, which made its US debut in November.

â€œI think every ship we launch is important,â€ Anrotcha told Cruise Critic in an interview in October. “Every ship that we start is a step towards returning to full functioning, which we are very focused on.”

Norwegian Cruise Line‘s Norwegian Pearl also resumed service a few days before Christmas. Sailing from her home port of Miami, the Norwegian Pearl first embarks on an 11-day Caribbean and Panama Canal itinerary that repeats throughout the winter.

Between these 11-day trips are interspersed a handful of shorter five- and three-night crossings that stop at Great Stirrup Cay, Harvest Caye or Costa Maya.

Enchantment of the Seas Cruises from Baltimore

Finally, on Thursday, Royal Caribbean also restarted cruises from Baltimore aboard Enchantment of the Seas.

The Vision-class ship built in 1996 will offer cruises to the Caribbean and Bahamas initially, followed by spring and summer trips to Canada, New England and Bermuda. It leaves on December 23 for Nassau and Freeport, with additional stops at Port Canaveral (Orlando) and Key West.

The return of Enchantment of the Seas is also notable as it marks the first time the ship has left Baltimore since 2013.

While Royal Caribbean has temporarily suspended short-term travel bookings through mid-January across its fleet to limit onboard capacity in recognition of the omicron variant of COVID-19, future Enchantment of the itineraries Seas are available for booking – including summer 2023 cruises when the ship makes a rare return to Vancouver, Canada and Alaska.