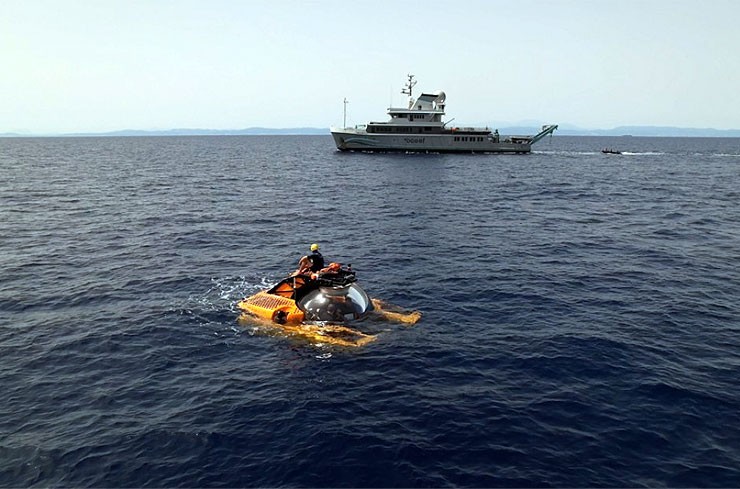 Analysis of the video and biological data is ongoing in the Maldives, at Nekton’s UK headquarters in Oxford and in partner laboratories. The discovery could have important implications for other ocean islands and the slopes of continents, sustainable fisheries management, carbon burial and storage, and ultimately climate change mitigation.

Scientists on the Mission Nekton Maldives discovered evidence of the “entrapment zone” – an oasis of ocean life seen 500 meters away – which is likely a previously undescribed ecosystem.

“The discovery of ‘the trapping area’ and oasis of life in the depths surrounding the Maldives provides us with critical new knowledge that further supports our commitments to ocean conservation and sustainable management, and almost certainly supports the fishing and tourismexplained the president of the Maldives SE Ibrahim Mohamed Solih.

“The image data, combined with the biological samples we collected from our submersibles and extensive sonar mapping all indicate megafauna predators such as sharks and other large fish feeding on swarms of micro-nekton – small swimming creatures that are trapped against the underwater landscape at this depth,” Detailed teacher Lucy Woodalllead scientist of Nekton.

The undersea volcanic strata and fossilized carbonate reefs that form the base of the Maldivian atolls combine steep vertical cliffs and sloping terraces that seem to prevent these species from diving deeper when the sun rises. These animals typically migrate from the depths of the sea to the surface at night and dive back into the depths at dawn, otherwise known as the vertical migration – the largest nocturnal migration on Earth. The trapped animals are targeted by large pelagic predators, including schools of tuna and sharks, as well as well-known large deep-sea fish, including the spiny oreo (named after the cookie) and the alfonsino.

“We have seen sharks in shallower waters in the Maldives before, but for the first time we were able to document an immense diversity of deep-sea sharks,” Explain Shafia Naeem, chief executive of the Maldives Marine Research Institute, who partnered with Nekton on the expedition. Tiger sharks, six gill sharks, sand tiger sharks, fruit bats, gulper sharks, scalloped hammerhead sharks, silky sharks and the very rare bramble shark have all been documented.

Marine ecosystems are defined by both topography and ocean life. “It has all the characteristics of a distinct new ecosystem,” explained the teacher Alex Rogers who spent more than 30 hours underwater in the mission’s submarines observing “the trap zone” during the expedition. “The trapping area creates an oasis of life in the Maldives and it is highly likely to exist in other oceanic islands and also on the slopes of the continents”added Professor Rogers.

While a trapping effect has been associated with biodiversity hotspots on seamounts or seamounts, it has not previously been linked to the different geomorphological and biological settings of oceanic islands, such as the Maldives. .

“The Maldives, an archipelago nation of coral atolls, faces an existential threat from human impacts and climate change. For our very survival as a nation, we must pursue science-based solutions that help us mitigate and adapt to the disastrous effects of climate change. » explained Dr. Hussain Rasheed HassanMinister of Fisheries, Marine Resources and Agriculture. “The evolutionary story of this magnificent nation of coral atolls is written as a record of bedrock, deposits and deep-sea wildlife. This mission shines a light on how we can use science to survive in as a nation.

Analysis of the video and biological data is ongoing in the Maldives, at Nekton’s UK headquarters in Oxford and in partner laboratories. The discovery could have important implications for other ocean islands and the slopes of continents, sustainable fisheries management, carbon burial and storage, and ultimately climate change mitigation. Previous Nekton missions have led to major scientific breakthroughs. His expedition to Bermuda in 2016 confirmed the discovery of the Rariphotic Zone, or rare light zone, a new ecosystem present between 120 meters and 300 meters deep.