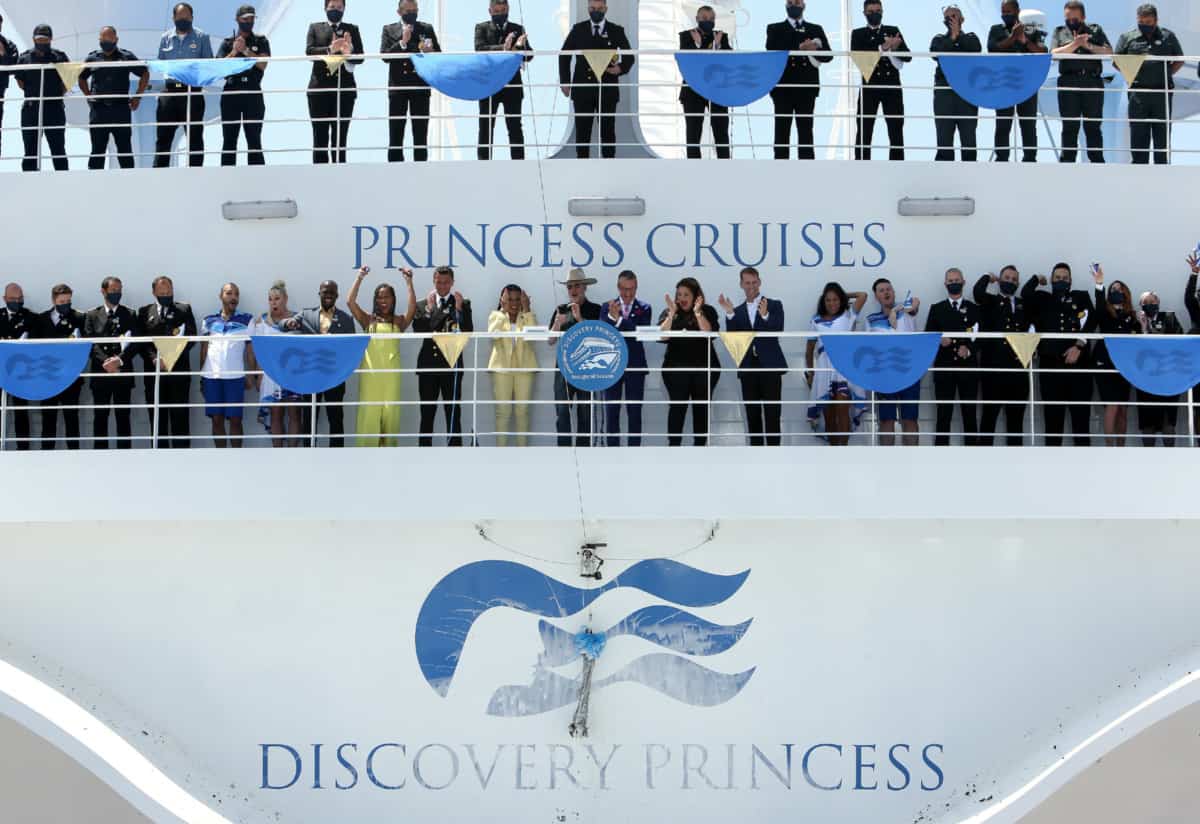 Discovery Princess officially named at a ceremony in Los Angeles

Discovery Princess, the newest cruise ship in the Princess Cruises fleet, was officially named at a ceremony in the Port of Los Angeles. The godparents of the new Medalion Class cruise ship are none other than Discovery Channel stars Randy Fenoli, chef Alex Guarnaschelli, Adam Savage and Page Turner.

The ceremony, themed “Discover our world”, celebrated the cruise line’s exclusive seven-year Discovery at SEA program. The program brings the spirit of curiosity and exploration to the ship with experiences such as Shark Week at Sea, exclusive shore excursions and onboard activities.

Princess Cruises‘ new ship has been officially named Discovery Princess at a special ceremony held aboard the ship in Los Angeles.

Before smashing a giant Nebuchadnezzar-sized (3.96 gallon) champagne bottle against the ship, the godfathers proclaimed: “We name this ship Discovery Princess. May God bless her and all who sail on her.

Randy Fenoli, who is the star of TLC’s “Say Yes to the Dress”; chef Alex Guarnaschelli, star of the show Alex vs. America from Food Network; Adam Savage of Mythbusters; and Page Turner, the host of the HGTV show “Fix My Flip”, they were asked to be godparents for the ship as part of the cruise line‘s exclusive partnership with the Discovery Channel.

As part of the Discovery AT SEA program, young and old can explore and satisfy their curiosity through experiences such as Shark Week at Sea, exclusive shore excursions and onboard activities such as Camp Discovery and Stargazing at SEA Youth Centers .

The ceremony was watched with attention by Captain Gennaro Arma and John Padgett, President of Princess Cruises, who said: “Today is a celebration to be remembered as our newest ship, Discovery Princess, is officially named by this talented group of experts and personalities – Randy, Alex, Adam and Page. We can’t think of more suitable patrons. to mark this milestone.

Discovery Princess has another sponsor. The ship’s Madrina, spiritual guide to the crew on board, is the general manager of the hotel Terri Cybuliak.

Discovery Princess is the fifteenth Medallion Class ship in the Princess Cruises fleet. The 3,660-passenger ship was built by Fincantieri shipyard in Monfalcone, Italy, and is the sixth and final Royal-class ship to be built by Princess Cruises.

the the ship has already been operational since March 27, sailing a series of voyages to the Mexican Riviera and the California coast. She will now travel to the spiritual home of Princess Cruises, Alaska. During the repositioning, she will call at San Francisco, Victoria, British Columbia, and arrive in Vancouver, Canada, on May 4.

After a short 4-day sampling cruise from Vancouver to Seattle, she will begin her season in earnest in Alaska, calling Seattle until September 18th. Ports of call during 7-day cruises aboard Discovery Princess include Ketchikan, Tracy Arm/Endicott Arm, Juneau, Skagway, Victoria, British Columbia and more.

During the 2022/2023 winter season, Discovery Princess will be based in Los Angeles, sailing to the Mexican Riviera.

Impact of COVID-19 on Online Payday Loans Market Share, Size, Trends and Growth from 2022 to 2031 – themobility.club

Royal Caribbean to recruit in Antigua/Barbuda for cruises