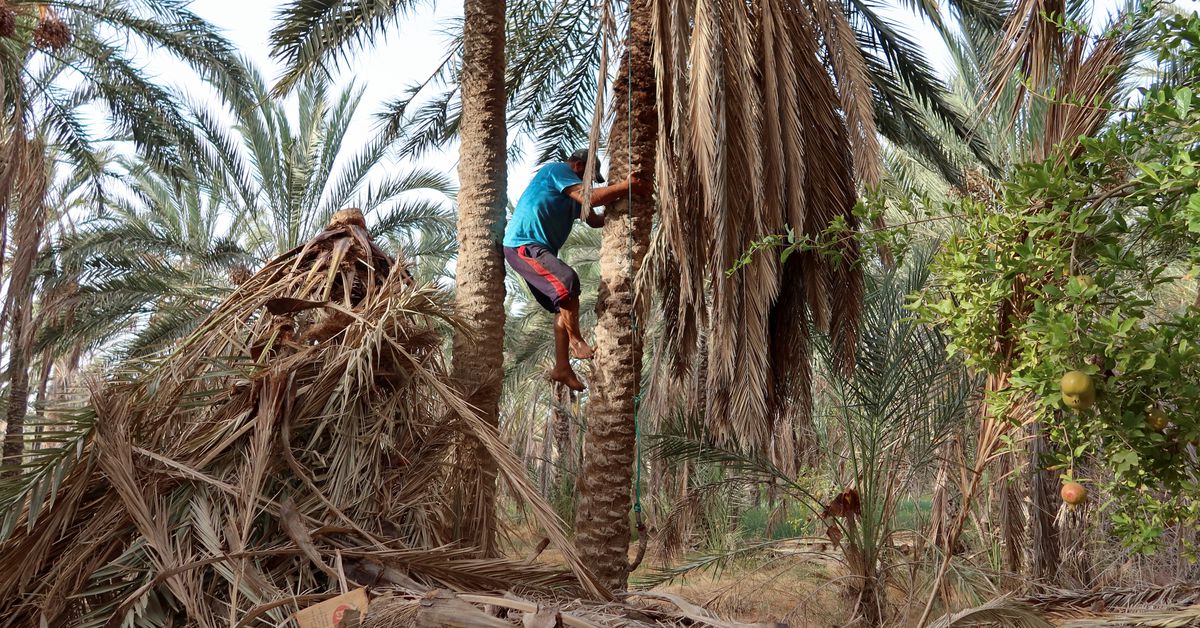 KEBILI, Tunisia, September 5 (Reuters) – In an oasis known as the hottest place in Africa, Tunisian farmers say they are fighting a losing battle against drought and diseases that are pushing many to give up the plantations where they grow some of the best dates in the world.

The date palm orchards of the oasis of Kebili once formed green and fertile islands in an arid landscape. But now many trees are dying and dry, bare, barren trunks stretch out into a clear blue sky.

The oasis in southern Tunisia has endured a decade of drought, and the challenge of irrigating the palm trees has grown as costs have risen and power cuts have become more frequent, say farmers and environmental activists.

“We haven’t seen rain since 2011. The ground water is boiling. When the electricity goes out, the farmers can’t use the water for irrigation and the water wheels are broken,” he said. farmer Mouhamed Bouaziz. “Everything happened at the same time”.

He is also treasurer of the local water association, which helps date growers access irrigation from underground aquifers.

The government, which was struggling to pay state salaries and fund wheat imports, was unaware of the plight of farmers, he said. Read more

Part of a chain of oases on the edge of the Sahara Desert, Kebili produces many dates that Tunisia exports to dozens of countries, mainly in Europe.

Farmers have long been accustomed to extreme heat – the highest temperature ever recorded in Africa, over 55 degrees Celsius (131 degrees Fahrenheit) was recorded in Kebili in the 1930s.

But they say the effects of climate change – the lack of rainfall as well as an infestation of date mites blamed on the dry weather – are making life even more difficult.

“If we continue like this with the drought and the drying up of the water table, in 20 or 30 years we will no longer find dates in Kebili,” said environmental activist Moez Hamed, peeling the stumps of desiccated palms. of a tree.

Other trees are showing signs of infestation, with clusters of dates wrapped in the web woven by the mites as they feed.

“It’s a new pest that we’ve never seen before, and its cause is drought,” Bouaziz said.

More than a third of the farmers stopped using the irrigation provided by his association because they could no longer afford it, Bouaziz said, and all were considering abandoning the oases.

Like many others despairing of a future in their own country, they were also willing to risk the dangerous journey across the Mediterranean to seek a new life in Europe.

“The farmers, especially the young people who will inherit these oases and preserve them, have migrated by sea,” Bouaziz said. “Those who survive survive, and those who die come back in a big box.”

“Do not divide the Indians”; this Ganesh mandal calls for community harmony, warns against fake news