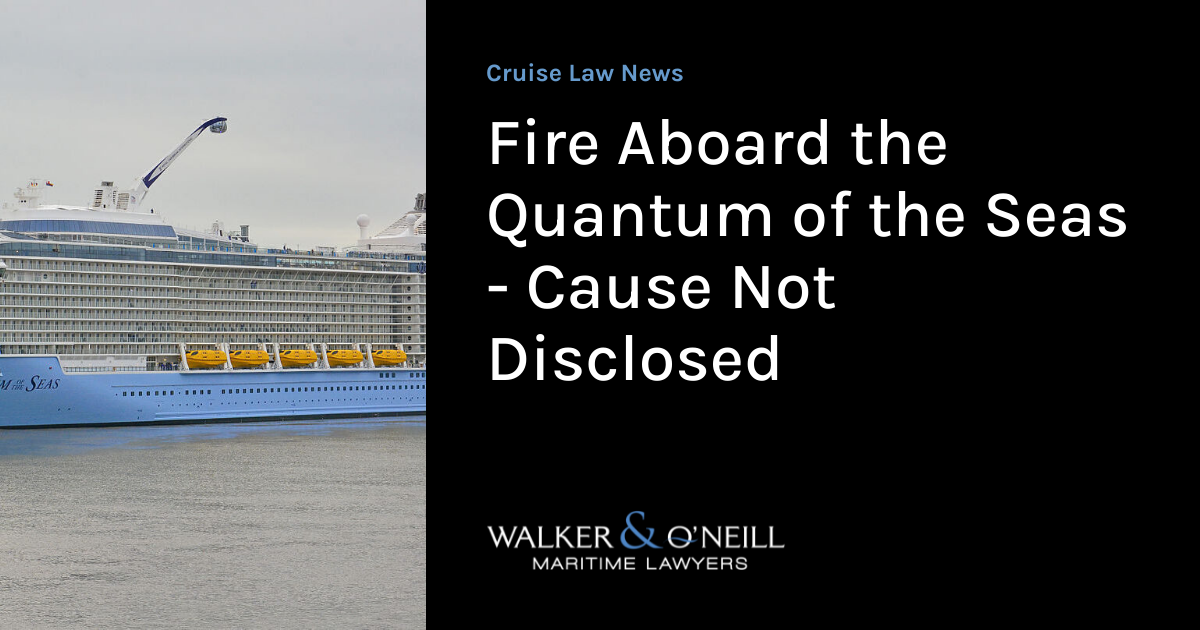 Fire on board the Quantum of the Seas – Cause undisclosed

Last night a fire broke out at quantum of the seas while sailing an Alaskan route, according to a Royal Caribbean crew member who wishes to remain anonymous. The crew member provided me with the following information:

“Fire on Quantum OTS last night in engine room/caisson area 5, multiple decks. Bravo announcement (code to alert the crew of a fire or other serious incident on board without alarming the passengers) at approx. 8:50 p.m., then again a few minutes later. When the theater let out, passengers were greeted by fire crews rushing up the stairs. The passengers were visibly a little panicked. Announcement of the kilo (Royal Caribbean ggeneral signal for crew to report to emergency stations) shortly after 9:00 p.m. with the crew running through the corridors in emergency vests. Deck 6 aft passenger cabins evacuated and deck 5 closed after the aft elevators. Passengers have been advised not to use the rear elevators and to stay clear of the area. The Captain and Cruise Director made a few announcements that there was a fire and crew members were working on it. At around 10:00 p.m. they announced that the fire was out and that they were working to clear the areas for them to reopen.

Just a little entertainment for the evening!

This morning we arrived in Juneau a little early (1 hour), but other than that business seems as usual.

When I asked the crew member if there had been a public announcement of the cause of the fire, the employee replied:

“Nothing. As usual, the only information given was the bare minimum.

A number of cruise guests tweeted about the fire, with several complaining about the lack of public information provided to passengers.

@RoyalCaribbean still no news and apparently the continual is moving from one end of the boat to the other. Elderly people with reduced mobility receive no help and no information. Please provide an update.

Fire during my cruise to Alaska last night! @RoyalCaribbean @RoyalCaribPR (Quantum of the seas). All evacuated forward when they couldn’t contain it as they hoped, they were one step away from the lifeboats. The crew finally got it 🙌 but the kids are terrified now. Never sail again.

One guest commented that the crew were ‘professional and prompt’ although he also mentioned that ‘it was still a bit scary with the alarms and doors closing’.

The ship is now open for all access and activities. The crew was professional and fast. It was still a little scary with the alarms and doors closing.

The Royal Caribbean ship departed Seattle, Washington on August 29 for a seven-day Alaska Glacier cruise. Prior to arriving in Juneau this morning, the ship sailed to Ketchikan on August 30 and Sitka on September 1. The ship is scheduled to call at Victoria, Canada on September 4 and return to Seattle on September 5.

Fortunately, no injuries were reported. There was no public disclosure of the extent of property damage or the cause of the fire.

According to cruisemapper.com, on June 5, 2014, a fire broke out on the Quantum during construction at the Meyer Werft shipyard in Papenburg, Germany. During the incident, two of the workers were injured, suffering from smoke poisoning. The vessel suffered damage estimated at approximately $68,000.

Ship fires are not uncommon, although cruise lines try to create the illusion that such hazards are rare. In a headlined article dated 2013, The New York Times concluded that cruise ship fires were “not unusual” (quoting cruise expert Dr. Ross Klein who testified before the US Congress), stating that:

“There were about 79 cruise ship fires between 1990 and 2011, according to Klein’s data. Until about 2006, there were usually three or four fires per year. From 2006, the number of fires doubled to around seven or eight per year. This increase, Klein said, is the result of a combination of better reporting (thanks, social media) and rapid growth in the cruise industry.

As part of their efforts to limit negative public sentiment, cruise lines prohibit their crew members from disclosing information to the public. Thanks to this particular crew member for leaking details to the public.

Do you have a comment or questions? Please leave one below or join the discussion on our Facebook page.