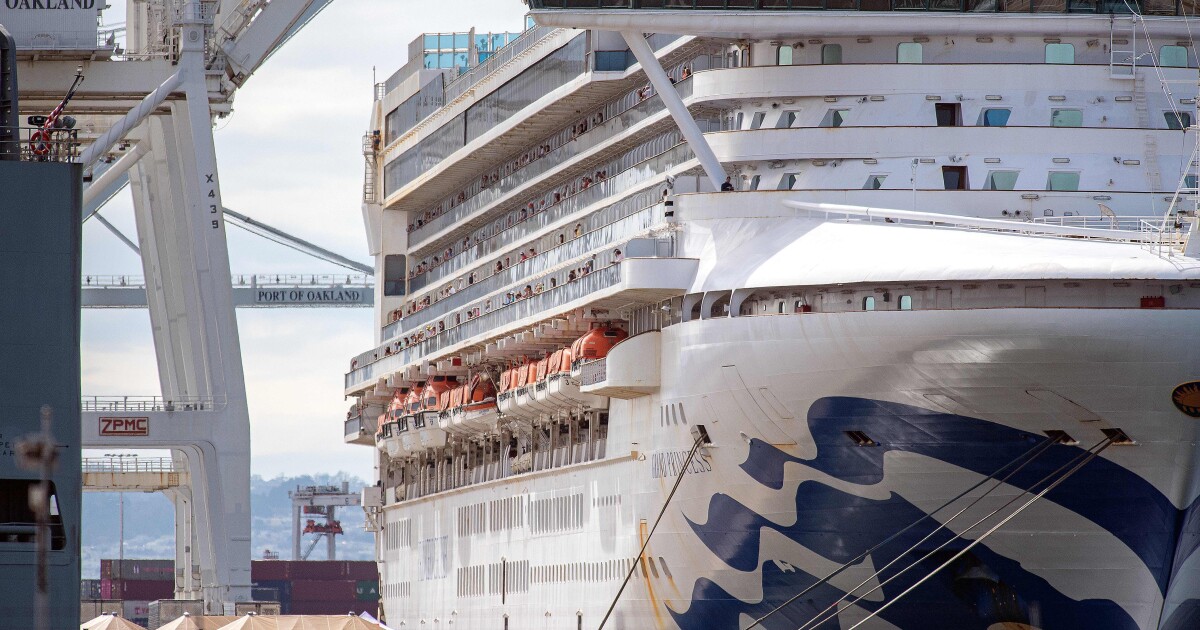 Grand Princess to leave LA, for the first time since COVID

The cruise ship that stranded thousands of passengers for days off the California coast during one of the country’s first cruise ship coronavirus outbreaks returns to sea on Saturday for the first time in 18 months.

The Grand Princess will depart from the Port of Los Angeles on a five-day cruise to Cabo San Lucas, Mexico, as part of a phased effort by the nation’s cruise lines to revive the $ 150 billion industry after a historic stop.

Among the changes allowing its launch: only vaccinated passengers and staff are allowed on board, masks are mandatory in common areas, and many cabins will be equipped with new air filtration technology.

â€œConsidering what happened last year, it is very important for [the cruise company] that the passengers and crew are safe, â€said Lara Handler, who is cruising Saturday with her husband, Blake, to celebrate their 30th wedding anniversary. Before the pandemic, the couple booked cruises almost once a year.

“They are doing what they need to do to make it so,” she said. â€œI feel pretty confident. ”

The 949-foot ship idled off the coast of San Francisco for several days in early March 2020 as public health officials and the cruise line deliberated on how to deal with a coronavirus outbreak on board. At least 21 people on the ship have tested positive for COVID-19. A week earlier, a 75-year-old passenger from a previous Grand Princess cruise had become the first COVID-19-related death in California, marking a major turning point in the state’s battle against the coronavirus.

Some cruises have been sailing off Europe and Asia for months, and ships began launching into the United States this summer from Texas, Seattle and Florida.

The Carnival Panorama, departing on weekly trips from the port of Long Beach in Mexico, relaunched on August 21 – the first cruise to depart from Southern California. The Port of San Diego is scheduled to reopen for cruises on October 1.

As part of the new health protocols aboard the Grand Princess, all passengers will be required to present proof of a full COVID-19 vaccination before boarding and proof of a negative viral test, carried out within two days of their departure. Date of departure. The crew will be vaccinated and the first cruises will be limited to a maximum of 75% of the capacity of the vessel of 2,600 people.

Passengers will be required to wear masks in places such as elevators, retail stores, the casino and before sitting in the main dining room and buffet.

The ship’s heating, ventilation and air conditioning system has been upgraded with filters designed to remove fine particles and bacteria, and some units will include UV light treatment systems to kill viruses in the recirculated air, according to Princess Cruises.

Most major cruise lines, including Carnival, Norwegian and Royal Caribbean – require passengers and crew on almost all cruises departing from U.S. ports to be vaccinated or to show proof of a negative COVID-19 test.

The Centers for Disease Control and Prevention recommends that unvaccinated people avoid cruises. â€œThe virus that causes COVID-19 is easily spread between nearby people on ships, and the chances of contracting COVID-19 on cruise ships are high,â€ the statement said. the agency says on its website.

The extended shutdown nearly capsized the industry. Carnival Corp., the world’s largest cruise line and parent company of Princess Cruises, said it has lost more than $ 14 billion since the start of the pandemic. Royal Caribbean, one of Carnival’s biggest competitors, lost more than $ 8 billion in the pandemic shutdown, the company said.

A survey of New York University School of Professional Studies found that only 10% of the more than 2,300 Americans surveyed planned to take a cruise this year, up from 36% in 2019.

Still, cruise lines say bookings are on the rise due to pent-up demand from cruise-goers who have been away for more than a year.

Carnival reported in its latest earnings report on Friday that the volume of bookings slowed last month due to an increase in cases of Delta coronavirus variants, but cruise bookings for the second half of 2022 have already surpassed 2019 rates.

“The broader travel environment, while turbulent, has improved dramatically since last summer, and we believe it should improve further by next summer, if the current trend in the deployment of vaccines and therapy advances continue, â€said Arnold Donald, CEO of Carnival. . â€œWe have also opened bookings for more distant cruises in 2023, with unprecedented early demand. “

Royal Caribbean said in its April-June earnings report that the company received around 50% more new bookings over the previous three months “with trends improving month over month “. In June, the company said bookings were up 90% from the first quarter of the year.

But the industry’s problems are not over.

The Carnival Vista, departing from Galveston, Texas, reported a COVID-19 outbreak last month involving 26 crew members and one passenger. A 77-year-old passenger who complained of symptoms of COVID-19 on the ship later died after being evacuated to a hospital.

Carnival, Princess and other cruise lines are also facing a wave of lawsuits from the families of passengers who died on cruises and from passengers who were affected by COVID-19 while on a ship.

But such lawsuits are unlikely to win huge rewards for passengers or their families, in part because cruise lines operate under maritime law, which limits damage from death, illness and injury in sea, said James Walker, a Miami lawyer whose firm has filed several lawsuits against cruise ships during the pandemic.

“The payment of lawsuits by cruise lines is, in my opinion, an insignificant cost in their business model,” he said.