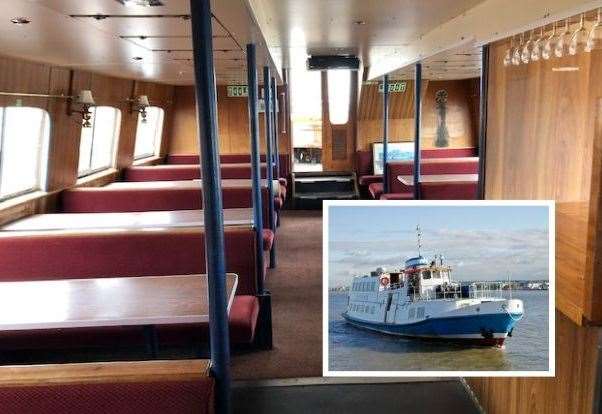 Gravesend ferry and Princess Pocahontas party boat for sale in Hoo for £125,000

A former Thames ferry that shares its name with a Disney princess is selling for £125,000.

The Princess Pocahontas, which has been carrying passengers along the Thames from Gravesend to Greenwich and beyond since the 1980s, was recently retired and is now being sold by Premier Houseboats in Hoo.

The boat is named after Pocahontas, the Native American woman who inspired the famous character in the Disney movie of the same name and who died in Gravesend around 1617.

Although it has been used as a passenger ferry, sightseeing boat and party boat since its first mooring in Gravesend, the Princess Pocahontas began life 60 years ago under a completely different name.

Gravesend historian Christoph Bull, with the help of local navigation expert Bob Scott, revealed some of the boat’s history.

The Princess Pocahontas was built in 1962, in Rendsburg, Germany. Initially as a ferry and harbor ship in Hamburg, she carried up to 300 passengers at a time.

It was then called Die Laboe, from the name of the Laboe Naval Memorial, a German monument now dedicated to sailors of all nationalities who have disappeared at sea.

Construction work on the memorial began in 1927 and was completed in 1936. At first it commemorated the war dead of the Imperial German Navy during World War I, and after 1945 other names were added for the members of the German Navy who died in World War II.

But in 1954, the memorial was rededicated to become its current symbol of all sailors lost at sea, regardless of nationality, and of peaceful navigation on the high seas.

While in Germany, Die Laboe was moored near Gravesham’s twin town, Neumünster.

The boat became the Princess Pocahontas in 1989 after being purchased by the Lower Thames & Medway Passenger Boat Co. Ltd in 1988, and took up residence in the final resting place of its namesake, Gravesend.

The life of the real princess was very different from that of her Disney counterpart.

Pocahontas, whose real name was Matoaka, was born the daughter of the powerful chieftain Powhatan around 1595 in present-day Virginia.

For much of her youth, her father’s rule was threatened by European invasions, and in 1612 she was captured by the English captain, Samuel Argall, as a ransom for eight colonists held by Powhatan.

Over the next two years, she became a symbol of friendship between her father and the English, and she was placed in the care of a reverend. She learns Christianity and meets John Rolfe, the tobacco planter who will become her husband.

In 1616 the couple had a son and moved to London. In March of the following year, they left to return to Virginia, with a brief stop in Gravesend to pick up fresh food and water.

Pocahontas, who was only 20 or 21 at the time, fell ill and died of unknown causes after being brought ashore.

She was buried in the nearby St. George’s Church in the town center, where a statue now stands to commemorate her life. The exact place of his burial is unknown to this day.

The former passenger vessel is available for purchase and Premier Houseboats said the vessel could be returned to service with some minor work or converted into a barge.

Villa Le Blanc: a serene and sustainable oasis on the Menorcan coast