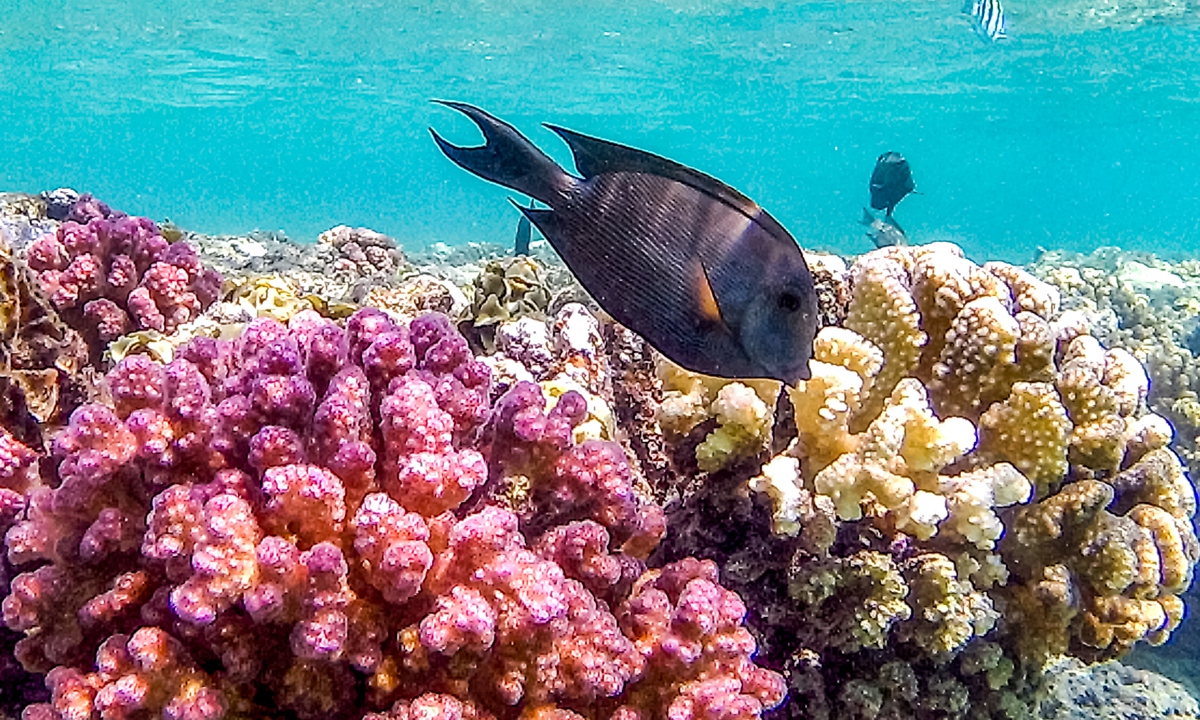 Beneath the waters off Egypt’s Red Sea coast, a kaleidoscopic ecosystem teems with life that could become the world’s “last coral refuge” as global warming eradicates reefs elsewhere, researchers say.

Most shallow-water coral, battered and bleached by repeated marine heatwaves, is “unlikely to last a century,” the Intergovernmental Panel on Climate Change said in 2022.

This threatens a devastating loss for the hundreds of millions of people around the world who depend on the fish stocks that live and reproduce in these fragile ecosystems.

Even if global warming is capped in the Paris Climate Goals of 1.5°C above pre-industrial levels, 99% of the world’s corals would be unable to recover, experts say.

But coral reefs in the Red Sea, unlike those elsewhere, have proven to be “very tolerant of rising sea temperatures”, said Mahmoud Hanafy, professor of marine biology at Egypt’s Suez Canal University. .

Scientists hope that at least some of the Red Sea’s corals – 5% of the world’s total remaining corals – could hold on amid what is otherwise an impending global collapse.

“There is very strong evidence to suggest that this reef is humanity’s hope for a coral reef ecosystem in the future,” Hanafy said.

Eslam Osman of King Abdullah University of Science and Technology in Saudi Arabia said: “It is crucial that we preserve the northern Red Sea as one of the last coral refuges, as it could be a seed bank for any future restoration efforts”.

The impacts of coral loss are disastrous: they cover only 0.2% of the ocean floor, but are home to at least a quarter of all marine animals and plants, helping to sustain the livelihoods of a half a billion people in the world.

Global warming, along with dynamite fishing and pollution, wiped out 14% of the world’s coral reefs between 2009 and 2018, according to the Global Coral Reef Monitoring Network.

Graveyards of bleached coral skeletons are now left where once vibrant and species-rich ecosystems once thrived.

Recent studies have shown that corals in the northern Red Sea are better able to withstand the disastrous impact of warming waters.

“We have a buffer temperature before the coral bleaches,” Osman said. “One, two, even three degrees [Celsius] of global warming, we are always on the safe side.”

Osman said one theory explaining corals’ apparent resistance to heat is due to “evolutionary memory” developed thousands of years ago when coral larvae migrated north from the Indian Ocean.

“In the southern Red Sea, coral larvae had to pass through very warm waters, which acted like a filter, only letting through species that could survive up to 32°C,” Osman said.

However, scientists warn that even if corals in the Red Sea survive soaring water temperatures, they are at risk of damage from non-climate threats – pollution, overfishing and habitat destruction, including development. coast and mass tourism.

The reefs off Egypt are hugely popular among divers, and some Red Sea dive sites operate at up to 40 times their recommended capacity, Hanafy said.

Fishing, another huge pressure, must fall to a sixth of current rates to become sustainable, he said.

For Hanafy, protecting the reef is a “global responsibility” and one that Red Sea tourism businesses – which make up 65% of Egypt’s vital tourism industry – must share.

Local professionals say they have already witnessed damage to parts of the delicate ecosystem.

One solution, Hanafy said, is for the environment ministry to step up protection of a 400 square kilometer area of ​​coral known as the Great Egyptian Fringing Reef.

More than half is already in nature reserves or environmentally managed areas, but the creation of a continued protected area would support the coral by “regulating activities and fishing, implementing capacity plans for charging and banning pollution,” Hanafy said.

Further south, off Sudan, a near absence of tourism has protected pristine corals from polluting boats and stray fins from divers.

But despite their greater resilience, corals are far from immune to climate change and reefs there have experienced several bleaching episodes over the past three decades.

For Sudan, a country mired in a severe economic and political crisis, coral monitoring is “difficult” without funding, Sudan’s Higher Council for Environment and Natural Resources has said.

Off the coasts of Egypt and Saudi Arabia, corals face threats from coastal development, including sewage and sedimentation from construction runoff, Osman warned.

The great irony, he said, is that while the natural wonders of the Red Sea corals have attracted tourists and developers, increased human pressures are in turn accelerating their destruction.

How to apply for a payday loan with PaydayDaze today in California.