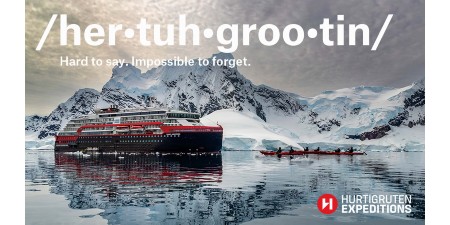 How to pronounce ‘Hurtigruten’ is the brand’s new US campaign

This broadcast, radio and digital advertising campaign kicked off today in the Twin Cities of Denver and Minnesota, Minneapolis and St. Paul.

The campaign features the Hurtigruten Expeditions and Hurtigruten Norwegian Coastal Express brands through photographs of iconic destinations accompanied by the tagline “Hard to Say”. Unforgettable.’

Largest investment in a US campaign

The $2 million campaign represents the company’s largest single campaign investment in the United States. It will run for two months and, for the first time, will feature radio and billboard advertising.

“As we emerge from the pandemic and more and more travelers plan their next unforgettable trip, we want to be at the forefront,” said Jeffrey Oar, who became president of Hurtigruten Americas in February. “The Denver area is home to potential travelers who love the great outdoors, exploration and discovery, and whose interests we believe align with the range of destinations and approach of our Hurtigruten Expeditions brand.

“In Minneapolis and St. Paul, a large community of Norwegian ancestry connects with the Hurtigruten Norwegian Coastal Express product, which takes customers to some of Norway’s most remote and beautiful communities. We aim to present the destination in the most authentic way possible, starting with pronouncing our name correctly.

Creative elements for the campaign were created in-house, including digital billboards, web banners, and radio and TV spots, all featuring the sights and sounds of Hurtigruten’s iconic destinations.

These range from the Galápagos to Antarctica and the West Coast of Africa for Hurtigruten Expeditions, and from warm weather jaunts in the Caribbean to a one-off pole-to-pole trip.

The Hurtigruten Norwegian Coastal Express, meanwhile, has been operating along the Norwegian coast since 1893. Originally conceived as a ferry service – Hurtigruten means “the fast route” – today the experience is partly a expedition cruise, part local ferry, part cargo ships that still serve as a vital lifeline connecting 34 communities along the rugged coastline.

In 2023, to celebrate its 130th anniversary, Hurtigruten Norway will launch the Svalbard Express and the North Cape Express, the line’s first premium cruise offerings. A revival of the iconic Coastal Express summer journey, the Svalbard Express will set sail on the completely revamped Trollfjord, visiting the Arctic Circle under the midnight sun and crossing the Barents Sea to Svalbard.

Who is Nymeria? Princess Rhaenyra wishes to become in the house of the dragon

Liz Pead on Finding Community Harmony, Conversing with One Another, and Being a Creator — Lindsay Advocate