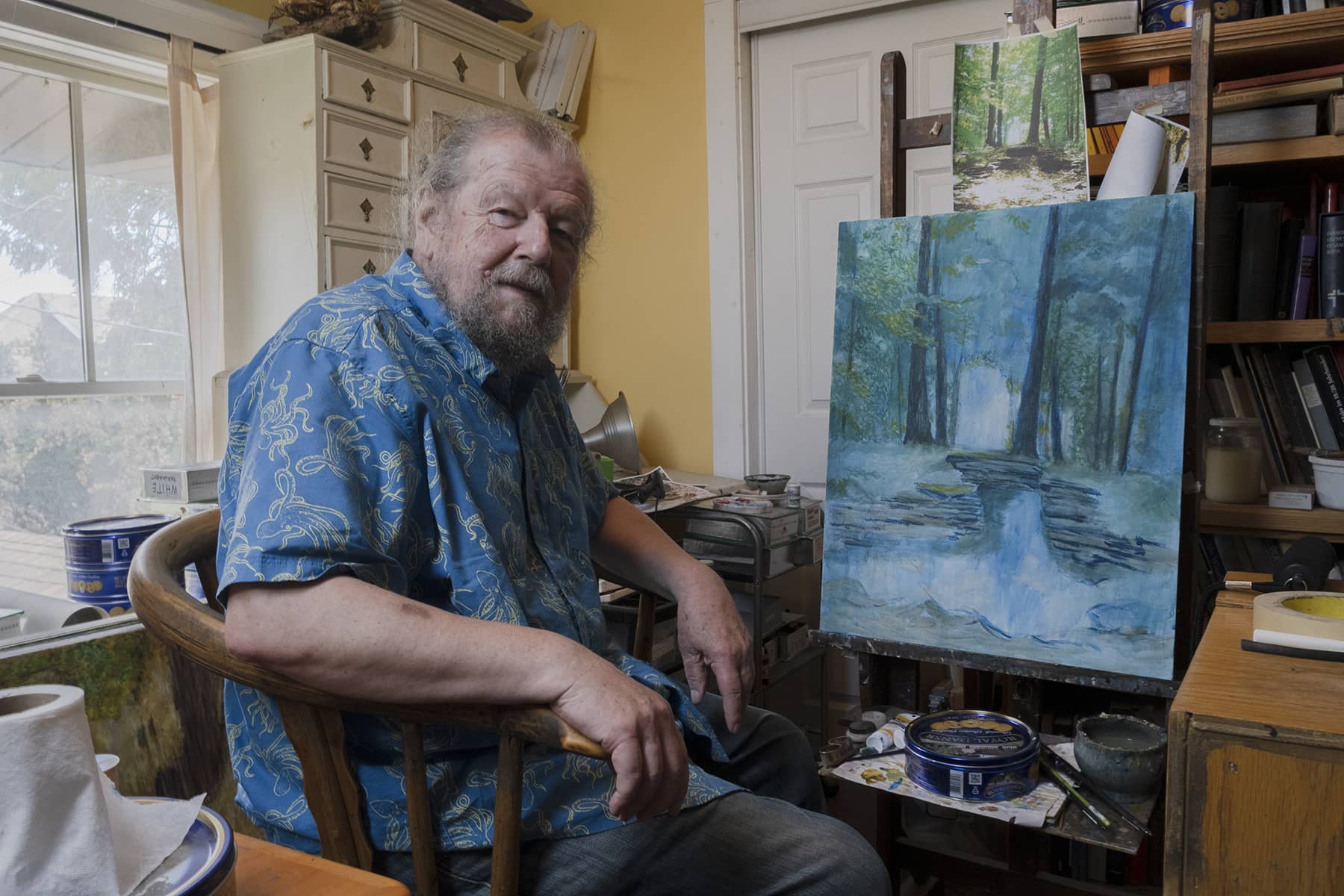 Michael Kutzer: Blurring Realities with an Artistic Worldview of Simultaneous Harmony and Ambiguity

While museums serve to democratize access to art, even these public spaces can paradoxically be perceived as exclusive because of the means by which their collections are assembled and the ways in which these collections are interpreted. Although historically associated with the wealthy and powerful, the act of collecting art is not out of reach for those outside of elite circles today – if people know where to look.

Within our own local community, there are a number of artists who are underappreciated. Many of them, for one reason or another, have never set foot on this chessboard to truly participate in an art market often defined by the tastes of a privileged few. Michael Kutzer is one of those underrated artists in Milwaukee whose works would fit so naturally into the permanent collection of any white-walled art museum.

Kutzer, an octogenarian artist who emigrated to Milwaukee from Germany in 2005, creates works inspired by his environment, Western mythology and his deep imagination. His paintings and prints vary in style and emotional character, depicting everything from Boschian anthropomorphs to serene Lake Michigan seascapes.

Like any great artist, years of perfecting his art combined with a unique self-expression that emerged during different chapters of his life has created a wide range of work. For an artist of such talent, with an extraordinary collection, it seems disconcerting that his art is not more widely recognized in his adopted city.

Nurtured by his painter father and a love for the mythologized ages of the past, Kutzer formulated his own approach to creating art long before he moved to Milwaukee. Although he learned the fundamental techniques of painting from his father, it was not his father’s idealized landscapes that first attracted him to the canvas. Instead, the studies and hobbies of her youth set the scene for a wonderful world in which the lines between fantasy and reality blur.

During his formative years, he attended a school that emphasized classical studies, learning Latin and Greek, and absorbing the cultures and traditions of ancient times. Beyond the classical world, that of medieval Europe also played an important role in Kutzer’s development. Not only was he a voracious reader of its sagas and legends, but he regularly visited places like Gottorf Castle with his collection of knightly garb and mummified bog bodies. Or the Viking walls of Haithabu near where the sunken ships stood, capturing the imagination of teenage explorers.

Kutzer described his early days in painting and printmaking as a “process of freeing himself from the overriding shadow of my father. The terrible experiences of the Second World War had made him a painter of nature and harmony avoiding the human body and concentrating on the beauty of animals, flowers and landscapes. To find my own way, I had to avoid these subjects and turn to subjects from my childhood, painting ruins or painting fantasies under the influence of Pieter Bruegel or Hieronymus Bosch.

Indeed, any admirer of Bruegel or Bosch would immediately recognize the similarities between the mischievous faces in Kutzer’s Punch and Judy woodcuts and the frequent use of molluscs in beautiful but dystopian scenes. Such thematic dualities appear regularly, with shelled sea creatures often playing a central symbolic role. As Kutzer sees, they “told tales of decay and death, but broken snail houses could also symbolize shelter and protection.”

A meditative practice, artistic creation helps her to face both the visible and the invisible, that of this world and that which belongs to a space of imaginative interpretation. After his father’s death, Kutzer created a series of square prints which he then fashioned into a small edition of hand-bound books.

About the series, Kutzer said, “I first evoked the medieval scheme of the dancing death, but I didn’t just choose scenes from the traditional hierarchy – the pope and the emperor up to the beggar, but I also tried more contemporary partners – journalist, clerk, alcoholic and garbage collector. Apart from individual partners, death has also had to deal with man-made disasters such as the death of forests, pollution of the sea, famine and war.

In this way, the enormous task of dealing with the death of a loved one has been shifted from an individual loss to one that encompasses the entirety of the world. The game of introspection and extrospection is found throughout Kutzer’s work.

A copy of this “Memento Mori” book now lives in Kutzer’s basement, along with hundreds of other paintings and prints that have found a temporary home on the shelves that create cavernous tunnels of Kutzer’s mind that manifest themselves on canvas, paper and wood panels. Descending the steps of his basement, it is easy to be immediately overwhelmed by the sheer amount of finished works among the assemblages of paint tubes and splayed brushes, figures and crab shells and other paraphernalia that are common characters in Kutzer’s art.

In the center of the room at the back of the basement is Kutzer’s printing press, the only bulky item he brought from Germany. A partner in artistic creation, he could not leave it behind on his trip across the Atlantic.

Once Kutzer moved to Milwaukee, an interesting transformation took place. The landscape paintings that called out to his father began to call out to him as well. Everything was new – his American wife, the natural surroundings filled with vistas of Lake Michigan, and the genuine chance to start afresh.

In Germany he carried a chip on his shoulder of being a teacher instead of solely pursuing a career as an artist. Leaving this life and the perception of others’ judgment behind him, Kutzer clearly saw the change in himself and easily admits, “my paintings have become more colorful and lighter”.

Oscillating between an emphasis on form and narrative, landscapes in Kutzer’s eyes were now more than pretty listless scenes, they had stories to tell. The etchings made with his printing press were given a variety of gouache colors that fully set the mood. A series of landscapes painted on circular targets were meant to highlight our vanishing environments and later even took “a more spiritual direction by using the rings as a symbol of the universe,” according to Kutzer.

Even with the change in appreciation of landscapes, his love of classical mythology never left him, as Ovid’s Metamorphoses have more recently become an inspiration for countless scenes. It remains difficult to ignore the connection between Ovid’s metamorphosis and Kutzer’s own sense of transformation during this reflective stage of his life.

Besides the depictions on his canvases, the early influences of the classics in his schooling nurtured a love of learning languages ​​and deciphering historical texts. During his primary school years he learned German Kurrentschrifta style of writing that fell into disuse in the early 20th century.

When he learned of a series of diaries kept at the Milwaukee County Historical Society written in Kurrentschrift by another German artist who immigrated to Milwaukee, Friedrich Wilhelm Heine (1845-1921), deciphering the text and learning about the life of the related artist became another calling for him. In the papers, Kutzer lived everyday life alongside Heine. More directly, it was in these diaries that Kutzer discovered Schlaraffia, a German-speaking fraternal club with the three pillars of friendship, art and humor.

Read on The Schlaraffia Story in Milwaukeeand discovering that the club still existed, Heine indirectly acted as Kutzer’s “godfather”, as he put it, guiding him to join.

Disconnected in time, these two German artists have become connected in their chosen home of Milwaukee. As Kutzer described it:

“It may seem strange to talk about a relationship with someone who died twenty years before you were born. But he was also an artist, and although battle paintings were never my cup of tea, some issues we have in common as painters: technical problems, showing his work to the public, caring for a family and dealing with colleagues Reading his daily triumphs and defeats, his satisfactions and sorrows were, while deciphering his terrible writing, also mine. You suffer with him and appreciate with him. You agree and disagree with him, you hope with him and you feel relieved. He and other people he talks about have become part of of my life. I myself was amazed at how much it really hit me when a friend of his passed away suddenly from the flu. I carry with me memories that he passed on to me. There are still a few shops in the center-v the city of Milwaukee or the historic buildings he talks about in the newspapers and when I come across them, they are not anonymous to me. His journals helped me feel at home.

The vicarious friendship only exemplifies Kutzer’s approach to life and art. The relationship between past and present helped form his Weltanschauung – a worldview – of simultaneous harmony and ambiguity. The distinctions between space and time, the known and the unknown, merge into a single reality, that of Kutzer.

Through his art, the public can also experience this reality. And as fellow Milwaukees, perhaps we too can participate in this special bond of place.

How to get the Harmony Key and complete the event

Game of Threads: The Princess and the Queen & Driftmark | watchmen on the wall