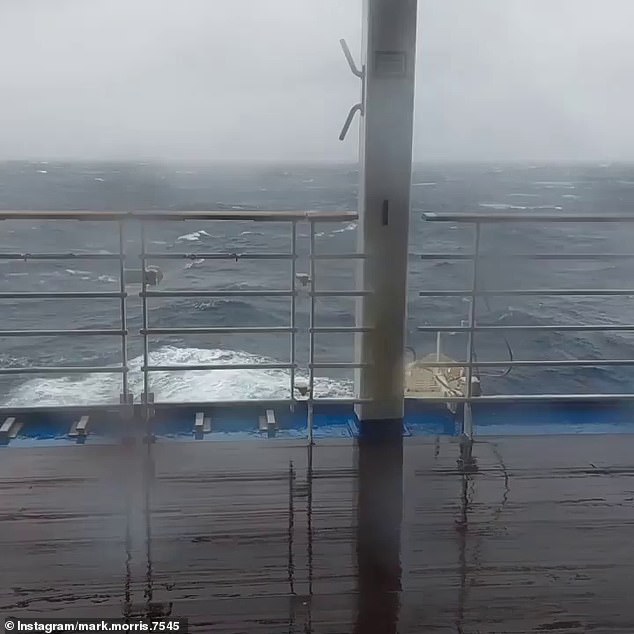 More than 2,000 cruise ship passengers will spend ANOTHER night at sea as the Coral Princess remains stuck amid wild weather and massive swell

Thousands of weary cruise ship passengers on the Coral Princess have to spend another night stranded at sea as harsh conditions make it too dangerous to try to dock.

The ship was due to dock in Brisbane at 7am on Friday, but its more than 2,000 seasick and Covid-stricken passengers remain off the coast of Caloundra.

The Coral Princess and its more than 2,000 seasick and Covid-stricken passengers remain off the coast of Caloundra, unable to enter Brisbane port due to heavy seas

Another 20 ships are also believed unable to enter the harbour, most floating or drifting.

The Coral Princess passengers were booked for a seven-day cruise along the Queensland and New South Wales coast, visiting Airlie Beach, Cairns and Port Douglas, but had to spend two additional nights on board due to wild weather.

The liner was due to dock on Friday morning but rough seas delayed its arrival, with a pilot unable to board.

Passengers continued to share videos on social media of the wild sea and its impacts on board, including the wobbly deck and the water in its pool spraying dramatically

It was forced to cycle in slow circles for the better part of two days as exhausted passengers and crew waited for conditions to improve.

“A pilot is essential to navigate the waters of the bay to port and the conditions are simply too difficult for us to have one on board,” a spokesman for the Port of Brisbane told the Courier Mail.

The port remains closed to navigation and pilotage services, according to a statement from Princess Cruises.

Passengers continued to share videos on social media of the wild sea and its impacts on board, including the deck swaying and the water in its swimming pool spraying dramatically.

“Last sunset on board,” one passenger captioned photos he shared on social media on Saturday night, adding, “Outside decks are still closed!”

But conditions appeared to have improved, with clear skies compared to earlier in the day.

The passengers of the Coral Princess were booked for a seven-day cruise along the Queensland and New South Wales coast and had to stay at sea two days longer than planned.

Conditions are expected to ease overnight, eventually allowing the liner and all other vessels to enter the harbour, although strong wind warnings remain in place.

The cruise ship had 120 Covid-infected passengers on board when the ship docked in Sydney two weeks ago.

The ship is a sister ship to the Ruby Princess which has been linked to 28 deaths after a massive outbreak on board in 2020 shut down the Australian cruise industry for two years.