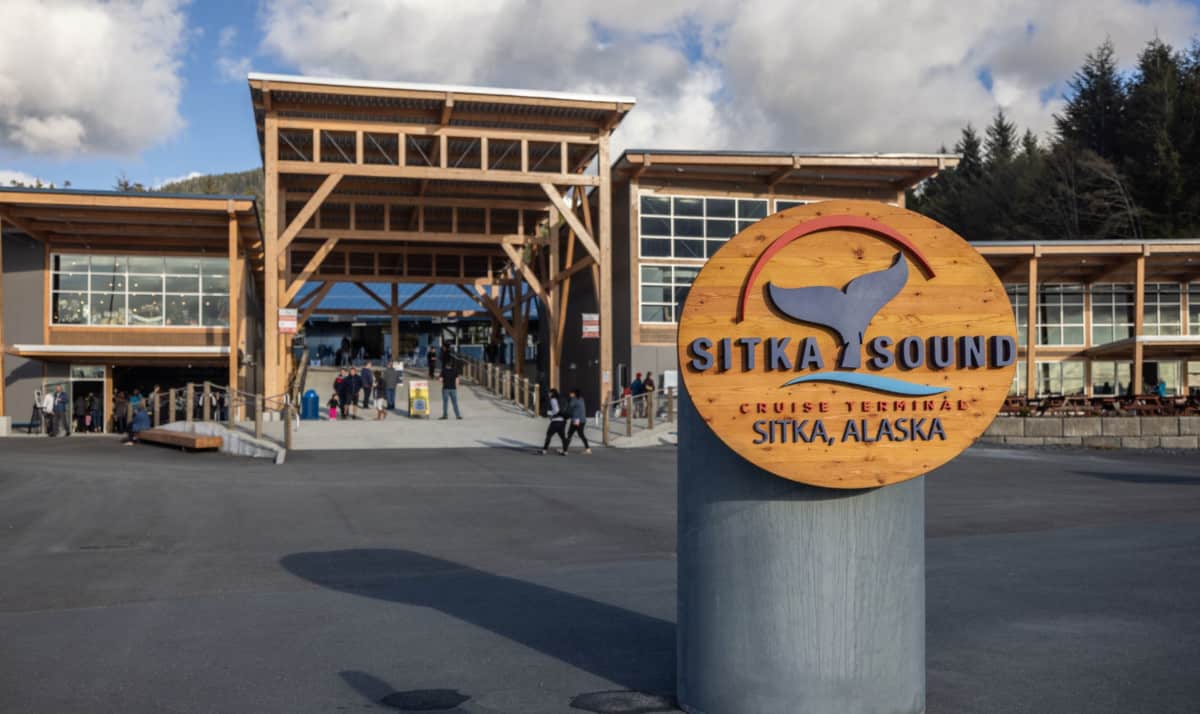 Two of the largest cruise ships visiting Alaska this season, Royal Caribbean International’s Ovation of the seas and Princess Cruises royal princessmade their first appearances in the popular Port of Sitka, taking advantage of the new Sitka Sound Cruise Terminal and its updated facilities.

The new terminal is one of the most updated in the state, and positions Sitka as a destination of choice for cruise passengers.

A new terminal makes its debut

The Sitka Sound Cruise Terminal is a 40,000 square foot wood-framed facility featuring local retail stores and restaurants, a covered outdoor patio, and a launching point for land and water excursions.

Attached to a 1,300-foot dock, the facility is designed to accommodate two 1,000-foot neo-Panamax-class cruise ships simultaneously, with a total capacity of 8,000 passengers per day.

“We are delighted to welcome cruise passengers in the summer of 2022 with this state-of-the-art dock and facility,” said Chris McGraw, owner of the Sitka Sound Cruise Terminal.

The terminal has six retail stores and two restaurants, all locally owned. A shuttle for cruise passengers between the terminal and downtown Sitka is designed to load up to four 60-passenger coaches at a time.

“The wharf and terminal are located approximately five miles from downtown Sitka; not only does this create a smoother start for water and land tours, but it keeps ships mostly out of the daily sights of locals and makes getting around downtown easier,” McGraw said.

The facility is majority owned by the McGraw family of Sitka, who first purchased the waterfront property in 2005. The first phase of the dock was built in 2011 and welcomed its first vessel, century of fameon September 18, 2012. Today, the facility shares minority investments with Royal Caribbean Group and Ceres Terminals Holding LLC, a partner of Royal Caribbean Group.

Many ships to visit this season

“More than half of all visitors to Alaska arrive by cruise ship. Here in Sitka, revenue generated from cruise ship travel benefits all levels of our local economy, supporting retailers and tour operators, restaurateurs and local government, as well as oil companies, grocery stores, property rentals and even seafood processors,” McGraw said.

“A thriving travel economy allows Sitka to continue to be a vibrant city with every opportunity for families to live, work and play.”

Later in the Alaskan season, ships from Windstar Cruises, Cunard Line, Carnival Cruise Line and Seabourn Cruises will also use the facility. Latest scheduled tours are by Silversea’s silver wind and Oceania Cruises’ Oceania Regatta early October at the end of the cruise season.

The opening of the new Sitka Sound Cruise Terminal is the latest in a trend of new and updated facilities designed to support cruise tourism throughout Alaska.

During the last years, Norwegian Cruise Line has developed Icy Strait Point in partnership with the Alaskan Native Community of Hoonah, creating a unique destination that celebrates and supports local history and culture.

Other communities have sought to tap into their unique Alaskan cultures and are increasingly providing opportunities for cruise passengers, with popular options such as glacier hikes, dog sledding experiences, fishing with salmon, lumberjack shows, historic train ridesand much more.

Realizing the importance of cruise tourism to the region, especially after the loss of the 2020 season and the shortened 2021 season, many Alaskan communities are eager to welcome cruise passengers back, but to do so from sustainably and preserves the unique natural beauty and culture of the region.

Cruise lines are also aware of Alaska’s huge rise as a bucket list destination, and are deploy more ships than ever to visit the final frontier and bring guests to the region in memorable and amazing ways.