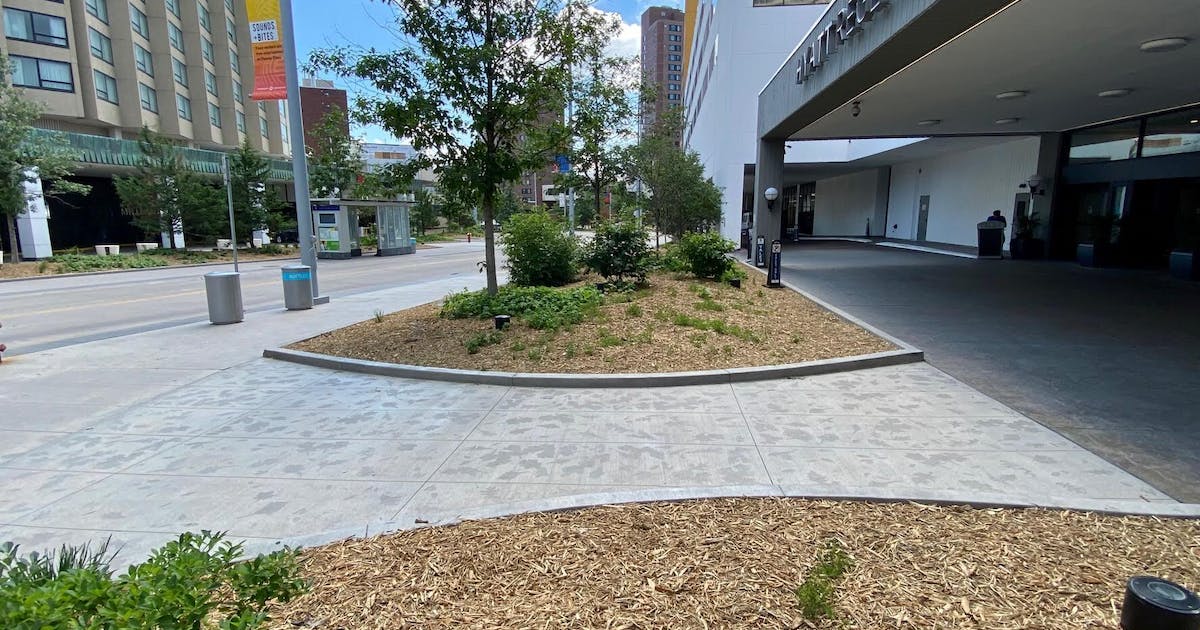 Nicollet Mall, once an urban oasis, is now flowerless

If Nicollet Mall had a theme song, it might just be “Where Have All the Flowers Gone” by Pete Seeger.

The main downtown pedestrian thoroughfare has now been five years in a revamp designed by New York-based James Corner Field Operations. The company’s $50 million remake isn’t without its strengths, but one major weakness is its depressing lack of greenery.

Not trees. The new mall actually has twice as many trees as its predecessor. It is the decided lack of greenery at ground level that is so glaring, a situation accentuated by Nicollet’s implacable ribbon of concrete.

Is this the city’s most pressing problem? Barely. But if political and business leaders want to lure workers into their offices and restore some semblance of pre-pandemic life to downtown Minneapolis, shouldn’t everything be done to put the city’s best foot forward?

One way to do this is to make Minnesota’s Main Street the promised pedestrian storefront. The park-like green of the planned remake render doesn’t match the current harsh reality.

What is the roadblock? Is it a labor shortage? A tight budget? Faulty irrigation systems? Soil damaged by salt? Indifference? It’s impossible for anyone in charge to consider mulch the answer to their beautification prayers while willfully ignoring the existence of hydrangeas, echinacea and beebalm.

But mulch – a veritable sea of ​​mulch – is what we have. And concrete. Nicollet desperately needs an abundance of annuals, perennials, flowering shrubs and ornamental grasses.

An attractive Nicollet could be a lively and welcoming Nicollet. Moreover, this beauty could help reinforce the perception of a safe Nicollet. Here are five unasked suggestions to help Nicollet Mall.

During its last renovation, the mall was divided into districts. For the blocks from Grant Street to 12th Street and 4th Street to Washington Avenue, much of the sidewalk right-of-way was given over to large open beds (bordered by sidewalk-like concrete barriers) that were intended to be filled with trees and a variety of greenery at ground level.

The company dubbed these two areas Woods, such as Mississippi Woods at the northern end of Nicollet and Loring Woods to the south. But today, a more appropriate name would be Wood Chips, because that’s what visually stands out.

These spacious beds are little more than dreary stretches of brown mulch, sadly punctuated with the occasional plant. Instead of mulch, imagine thousands of blooming marigolds, zinnias, geraniums, begonias or impatiens, providing a much-needed jolt of mood-enhancing color to ease the boredom of Nicollet’s concrete doldrums.

2. Sleek pots filled with colorful annuals materialized on Nicollet nearly two years after the project was officially inaugurated in 2017. Their appearance was a signal that it is possible to fill Nicollet’s gaps without significant investment in infrastructure.

There are about 50 pots scattered around Nicollet, which is a good start, but why aren’t there 150? Or 250? Current figures average about three pots per block, a paltry figure, especially given the obvious need to animate Nicollet’s bland monochromatic landscape.

3. One of Nicollet’s most talked about pieces of equipment is a series of custom designed mobile chairs. Painted in cheerful shades of blue, yellow or green, they inject welcome pops of color into Nicollet’s unrelenting expanse of concrete. But where are they?

On a recent afternoon, there were only 22 chairs (and four tables) spread across four Nicollet blocks. This means that the other eight blocks of the mall had no place to sit.

4. Why bother with those bollards – yes, it’s duller concrete – when similarly sized flowerpots, filled with eye-pleasing greenery, could serve the same purpose?

5. To demonstrate that blooming beauty is possible on Nicollet, take in the manicured landscape outside Westminster Presbyterian Church (this is the work of Chicago-based landscape architecture firm Hoerr Schaudt, in collaboration with JDD Studio of Minneapolis). The church congregation obviously places a priority on urban beauty; hoping that Nicollet will follow this excellent example.

A living symbol of harmony and syncretism