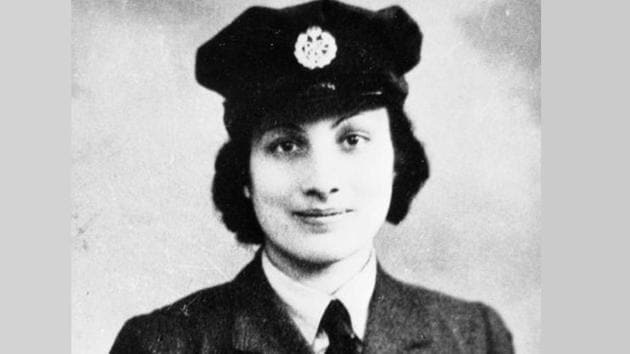 Noor-un-Nisa Inayat Khan, also known as Nora Inayat Khan and Nora Baker, was a British spy during World War II who served in the Special Operations Executive (SOE), which was responsible for conducting espionage and recognition in occupied Europe and to help local resistance movements.

As an SOE agent under the codename “Madeline”, she became the first female wireless operator to be sent from the United Kingdom to occupied France to aid the French Resistance during World War II. Noor was captured after being betrayed and executed at Dachau concentration camp in Germany.

For her service in the SOE, she was posthumously awarded the George Cross, the UK government’s highest honor for non-operational gallantry, which is equivalent to the Victoria Cross, the highest military gallantry award. She is also a recipient of the French Croix de Guerre with a silver star (with vermeil star). A memorial bust of Noor Inayat Khan has been erected in Gordon Square Gardens, Bloomsbury, London.

It is the first memorial dedicated to a Muslim or Asian woman in Britain. Noor was also commemorated on the FANY memorial at St Paul’s Church, Wilton Place, Knightsbridge, London, which lists the 52 members of the Corps who gave their lives in active service. Noor was commemorated on a stamp issued by the Royal Mail on 25 March 2014 in a series of stamps on ‘Remarkable Lives’. In 2018 a campaign was launched to have Noor depicted on the next version of the £50 note.

On February 25, 2019, it was announced that Noor Inayat Khan would be honored with a blue plaque at her wartime London home at 4 Taviton Street in Bloomsbury – the house she left behind on her last and fatal mission and the address she engraved on it. bowl in jail so she can be identified. Noor is the first woman of South Asian descent to have a blue plaque in her honor in London.

Many books, plays, poems, films and documentaries have been produced to pay tribute to this gallant and selfless Muslim girl from the subcontinent.

It is ironic that while Noor Inayat Khan sacrificed his life to fight off the onslaught of the Nazis in defense of Britain and her allies in World War II, his great-great-great-grandfather Tipu Sultan, the Tiger of Mysore was martyred in 1799 trying to rid his homeland of British occupation.

Noor Inayat Khan, the eldest of four children, was born on January 1, 1914 in Moscow. His father, Inayat Khan, a direct descendant of Tipu Sultan, had settled in Europe as a musician and teacher of Sufism. His mother, Pirani Ameena Begum (née Ora Ray Baker), was an American from Albuquerque, New Mexico, who met Inayat Khan during her travels in the United States.

In 1914, shortly before the outbreak of World War I, the family left Russia for London. In 1920, they settled in France. After her father’s death in 1927, 13-year-old Noor took responsibility for her grieving mother and younger siblings. She then studied child psychology at the Sorbonne, as well as music at the Paris Conservatory.

As a young woman, Noor also began a career as a writer, publishing her poetry and children’s stories in English and French, becoming a regular contributor to children’s magazines and French radio. In 1939, his book Twenty Jataka Tales, inspired by Jataka tales from the Buddhist tradition, was published in London.

After the outbreak of World War II, when France was invaded by German troops, the family fled to Bordeaux and from there by sea to England.

Although Noor was a pacifist by nature, she raised her voice for India’s freedom, but she and her brother Vilayat decided to help defeat the Nazi tyranny. In November 1940, Noor joined the Women’s Auxiliary Air Force (WAAF) as Airwoman 2nd Class and was sent to train as a wireless operator. In June 1941, she applied for a commission.

Due to her fluency in French and her skills as a wireless operator, Noor was picked up by the SOE and trained in espionage. She was promoted to Assistant Flight Officer (the WAAF equivalent of RAF Pilot Officer) and smuggled by Lysander aircraft to France. Her mission was very dangerous and she was the first female wireless operator to be sent to France. Her new identity was a nursery nurse, “Jeanne-Marie Renier”, using false papers.

After a successful stint, Noor became endangered when the Germans began rounding up British spies due to a mole leaking information.

Noor was given the option to return but she chose to stay due to the sensitivity of the mission and being the only wireless operator behind enemy lines. Unfortunately, like her ancestor Tipu Sultan, she too was betrayed by another agent and arrested. Noor attempted to escape twice but was apprehended and sent to Germany. Despite extreme torture, Noor refused to reveal any vital information to his captors. On September 13, 1944, Noor, along with four other captives, was executed and buried in an unmarked grave.

The legend of Noor Inayat Khan lives on and she is an inspiration to women in Britain as well as the subcontinent.

The minister reconsiders his plan to reduce the number of cruises