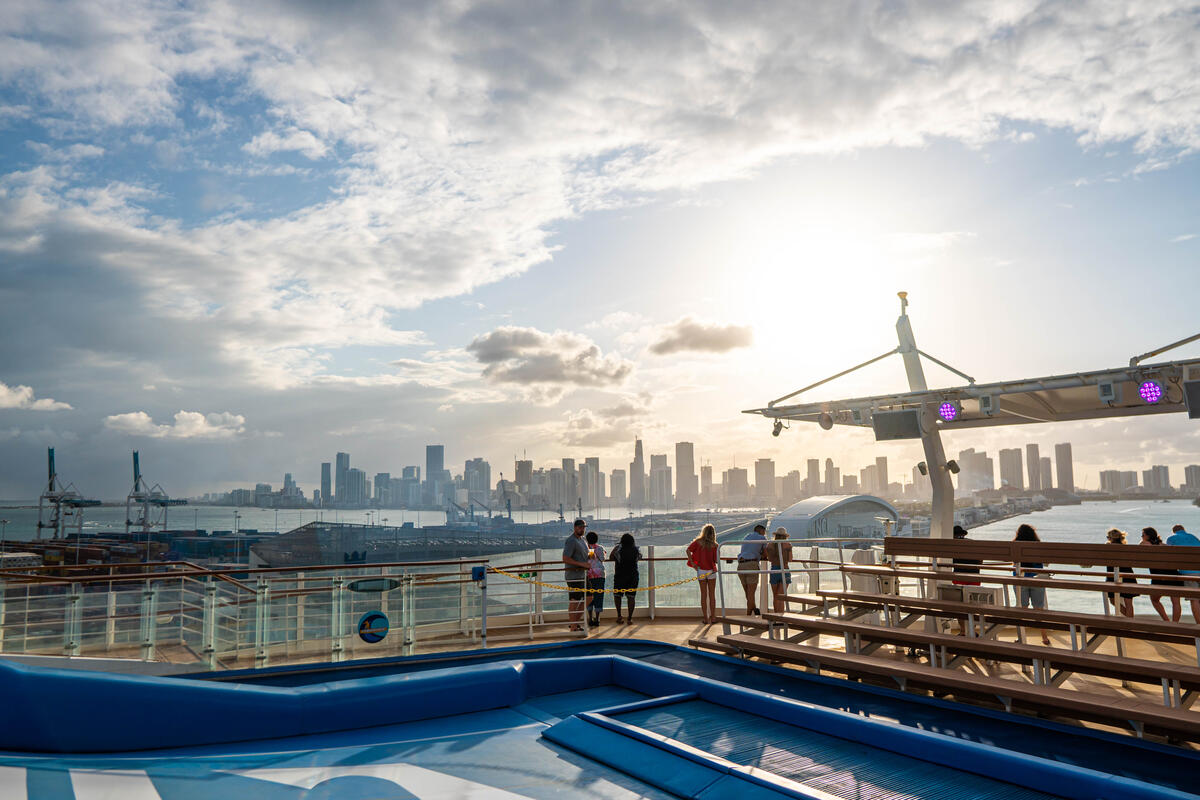 Today is the first day of my Western Caribbean cruise on Oasis of the Seas, and I’m blogging live this week showcasing all that this Oasis-class cruise ship has to offer. This is a 4 night cruise with two days at sea and one day in port in Costa Maya, Mexico.

Oasis of the Seas marks my first sail from Miami and my first cruise as a Diamond Member of the Crown & Anchor Society!

Although I don’t have fixed plans for the week, I hope to discover the activities and places that make Oasis of the Seas unique, such as Portside BBQ and CATS the Musical.

I arrived in Miami late last night and stayed the night at the Holiday Inn & Suites Miami Airport East. Located directly across from the airport, the Holiday Inn was convenient, clean, and affordable. Although not the most exciting location in Miami, it worked well for a 10pm arrival.

The hotel offered a shuttle to the cruise terminal, but I opted to take a Lyft, which turned out to be around $22. When I arrived at the terminal, I was pleased to see relatively few queues. The registration process took about 20 minutes in total.

I didn’t fancy going to the Windjammer, which was probably packed with people, so enjoyed a quick lunch at El Loco Fresh while waiting for my cabin to be ready.

The cabins were ready at 1 p.m., and I’m staying in an inside cabin for this navigation. While the decor seems a bit dated compared to my cruise last month on Wonder of the Seas, I was pleased to find the room comfortable and spacious enough.

My first priority today was to redeem my first Diamond drink voucher. Until now, most of the extra money I’ve spent on cruises has been on drinks, and I’ve never liked paying $15 for a cocktail. So, to celebrate achieving Diamond status, I enjoyed my first free drink: a mango banana smoothie from Vitality Cafe.

I had quite a bit of credit on board, so I decided to try something new for this cruise: a thermal suite pass to the Vitality Spa. I booked the 4 day pass through the spa reception for $59 (plus 18% tip).

The thermal spa, located on Oasis and Quantum class ships, is a thermal suite featuring hot stone loungers, steam chambers, a dry heat chamber and rain showers. Vitality Spa sells passes that last the entire cruise and there is no limit to the number of times you can enjoy the thermal spa, which is open from 8:00 a.m. to 8:30 p.m.

After buying my pass, I settled into a seaside suite and tried out the thermal spa. I tried all three saunas: the steam room, the aromatic steam room and the dry heat chamber. All were fantastic, but my favorite was the aromatic hammam.

I also tested the rain shower, which has four options: rainforest, storm, waterfall, and ice fog. Each type of shower disperses water differently, from the mist of an ice fog shower to the rapid jet of a waterfall.

I spent most of my time in the spa on the hot stone lounger wondering why it took me so long to buy a spa pass!

Needless to say, I will probably spend a lot of time in the spa on this cruise. In fact, lying on the hot stone lounger with my laptop could become my new blogging office…

I spent the rest of the afternoon on board relaxing, first on the pool deck and later in my cabin.

Dinner tonight was at the Windjammer. I’m not a big fan of the location of the Windjammer on Oasis class ships, as the area generally feels cramped. I think this is one of the biggest upgrades to Wonder of the Seas, which has the largest Windjammer in the fleet.

Despite the crowds, the Indian curry I had at the Windjammer tonight might have been the best I’ve ever tried on a Royal Caribbean cruise! My dessert did not disappoint either.

As I started sailing last August, this is my first cruise with a self-service buffet. While it’s nice to be able to choose exactly what you want from the buffet, I definitely prefer the crew serving the guests. The stations quickly got messy and it felt much slower than I was used to.

Sailaway was delayed an hour to 6:30 p.m. As it was right in the middle of dinner time, there were hardly any crowds outside to browse and I was able to get a good seat aft of the sports deck!

Sailing out of Miami was beautiful with the sunset creating a downtown skyline and giving Miami Beach the perfect glow. I had heard a lot of good things about sailing from Miami, and it was certainly one of the most beautiful crossings I have ever seen.

Read more: The best place to sail on all Royal Caribbean cruise ships

I booked a seat to see Aqua80s at the AquaTheater tonight. I had heard good things about this AquaTheater show, so the excitement was high. I was originally going to book the show on Day 3, but since AquaTheater performances can often be canceled due to weather, I thought I’d give it a try on Day 1 just in case.

I ended up really enjoying the show, which had an energetic and upbeat atmosphere. The performers pulled out all the stops for the show with diving, slacklining, acrobatics, dancing and jumping, and it was great fun to watch.

Called it one night after the AquaTheater show to get a good rest for a fun day at sea tomorrow on our way to Mexico.

Because I started sailing just as the industry restarted after the coronavirus shutdown, my experience of cruising has been quite different from what was once considered “normal”. So, one thing that confuses me is the amount of chairs and lounging areas in the cruise terminals. Did people sit in it at some point while waiting to board the ship? I can’t think of a time when you would need to sit in those waiting areas now with staggered boarding times!

Central Park plants look bigger on Oasis compared to what I’ve seen on Harmony and Wonder. I feel like I’m in a park more on this ship than the others.

I’m surprised there aren’t any sort of chairs at the back of the sports deck near the Ultimate Abyss (aside from the Wipe Out Bar seats).

I had a noon check-in time at the terminal, but no one was checking the times when I arrived.

US cruise lines must reimburse passengers for canceled or delayed departures

When is the Princess Pavilion Garden Cafe and Bandstand events open: details