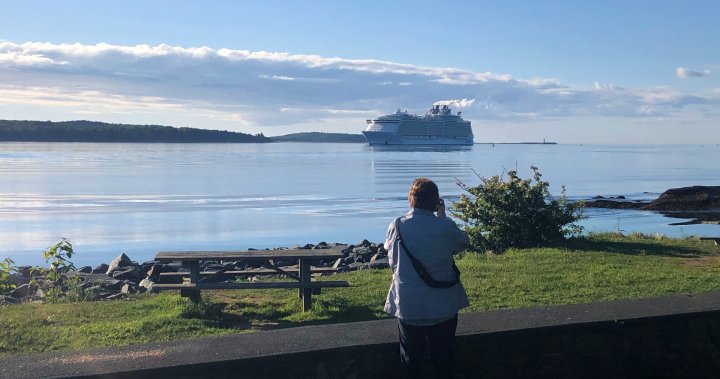 Oasis of the Seas, the 4th largest cruise ship in the world, sails to Halifax

Dozens of people gathered at Point Pleasant Park and the Halifax waterfront to watch Oasis of the Seas arrive in Halifax on Tuesday morning, the biggest cruise port call the city’s port has seen to date.

The Royal Caribbean International ship is the fourth largest cruise ship in the world.

WATCH: Global’s @eilishbonang was on the Halifax waterfront when the largest cruise ship to ever call at Halifax Harbor docked this morning. https://t.co/2MdhBYt71v pic.twitter.com/nMdCXwu1Dj

The story continues under the ad

The ship’s gargantuan size leaves room for a number of amenities, including a zip line, basketball court, and water park.

According to a statement from the Port of Halifax, the ship will not be in Halifax for long. It is scheduled to depart at 6 p.m. Tuesday, before heading to Saint John Harbour.

Cruise ships return to Halifax waterfront for first time since 2019

3:28
Oasis of the Seas comes to Halifax

It’s the first year the city has welcomed cruise ships to its port after a two-year hiatus due to COVID-19.

Ships began arriving at the Port of Halifax in late April. About 175 ship calls are expected during the cruise season, which peaks in the fall.

The story continues under the ad

The Oasis of the Seas is on its way this morning! 🛳

This is the largest cruise ship to ever visit Halifax. It’s over 1180 feet long, with 16 decks, a basketball court, water park, zipline, 30-foot diving platforms and more!#DiscoverHalifax • @portofhalifax pic.twitter.com/JcglbrK5r5

The man behind the harmony between Mukesh and Anil