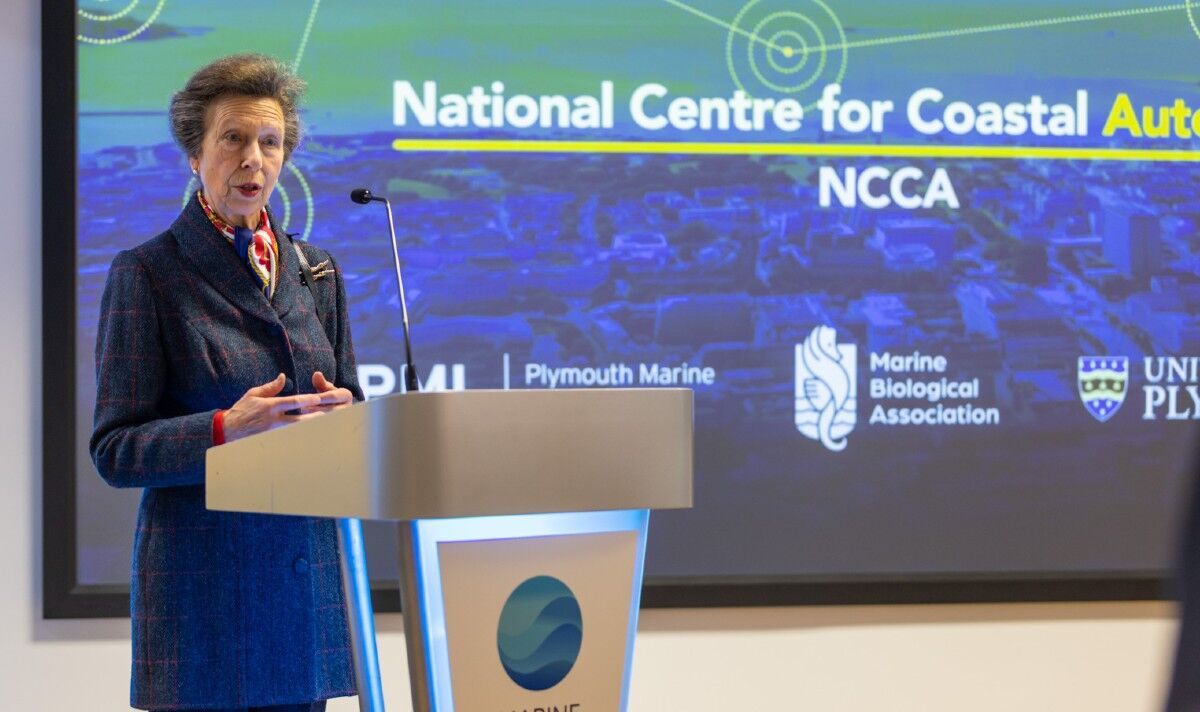 Yesterday, October 21, Princess Anne was at Plymouth Marine Research Center where she gave a talk at the launch of the National Center for Coastal Autonomy, the world’s first fully integrated net-zero autonomous observation and monitoring network. UK. For the occasion, the princess was dressed in a tartan jacket and matching pants.

Princess Anne donned a long gray jacket adorned with a subtle red tartan print as she stood in front of the lectern at the National Center for Coastal Autonomy in Plymouth.

The jacket had a pronounced collar and large gray buttons running down the center.

To match, the royal wore gray trousers with the same red plaid print.

Under her jacket, it looked like the princess was wearing a red long-sleeved top as only the end of the sleeves were visible.

READ MORE: A ‘game-changing’ fashion hack to ‘look expensive’ – Meghan is a fan

The royal completed her outfit with a silk scarf adorned with a red, blue, white and yellow pattern.

It was tied around his neck and under his jacket.

Anne added black shoes to her look and a pair of black leather gloves.

As for accessories, she carried a black leather handbag and wore tiny pearl earrings.

The royal’s hair was in its usual bun at the back of her head, her gray locks held in place by a hair clip.

Anne is a fan of pearls and seems to wear her pearl earrings every day. This is possibly inspired by her mother, who was also rarely seen without her pearls.

The Queen usually wore a pair of small pearl earrings, along with her three-row pearl necklace.

Interestingly, the royal family‘s love of pearls could be tied to status, according to Arseniy Budrevich, jewelry expert and founder of Budrevich Fine Jewelery Studio.

He told Express.co.uk: “Pearls have been associated with class, elegance and sophistication since the Ptolemaic dynasty in ancient Egypt, where the royal family wore pearls to show off their status.

“This tradition was then passed down through the Holy Roman Empire to the French monarchs who brought it into fashion in the Middle Ages, where it was then dispersed across Europe.

“That’s when the British Empire took over the style.”

Arseniy continued: “The royal family wears pearls to represent the aristocratic virtues of liberality, magnificence and generosity. They also symbolize purity and chastity.

“The Queen was most often depicted wearing pearls, usually wearing one of her sublime pearl necklaces with a matching brooch and earrings.”

Royal fans were quick to congratulate Anne on her appearance at the center yesterday.

Ollie Thomas, PhD student at the University of Plymouth, said: “It was an honor to meet HRH The Princess Royal today at the @marineresplym smart sound event and to have a brief opportunity to chat about seagrass .”

Professor Steve Widdicombe, who also works at the university, added: “Such an exciting new initiative for marine science in Plymouth, the wider South West region and across the UK. The energy, enthusiasm and collaborative spirit in the room today was inspiring. What a great time to be a marine scientist.

A hidden ‘living oasis’ has been discovered at the bottom of the ocean in the Maldives: ScienceAlert