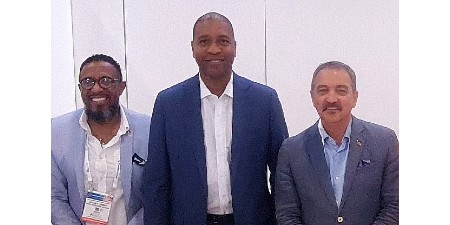 Royal Caribbean to recruit in Antigua/Barbuda for cruises

It was the second such agreement signed by the cruise giant at Seatrade Cruise Global, after the one with Barbados.

“This initiative will not only allow a large group of our tourism professionals to find gainful employment while being ambassadors of our country, but it will further strengthen the partnership between the Government of Antigua and Barbuda and Royal Caribbean. It’s a win-win solution for all of us,” Fernandez said.

The Minister also spoke of the government’s careful and successful handling of the coronavirus pandemic which has given Royal Caribbean the confidence to hire the citizens of Antigua and Barbuda knowing that they are immunized, trained and possessed. the skills needed to add value to cruise operations.

For his part, Benford noted that the relationship between Royal Caribbean and Antigua and Barbuda dates back “well over 30 years.” We have supported each other through the most difficult times and the signing of this agreement demonstrates the strength of our partnership and will boost the tourism economy.

“Antigua and Barbuda saw a strong rebound in cruise arrivals in January and March this year and Royal Caribbean played a major role in that,” Tourism Authority CEO Colin James said. “This new partnership will have a positive impact on hospitality employment opportunities for the destination, which goes beyond simply welcoming cruise passengers to our shores.”

The jobs initiative will begin with a major job fair in St. John’s in June, open to nationals and residents of Antigua and Barbuda.

Discovery Princess officially named at a ceremony in Los Angeles

Should you ever take out a payday loan? Here’s what Dave Ramsey thinks