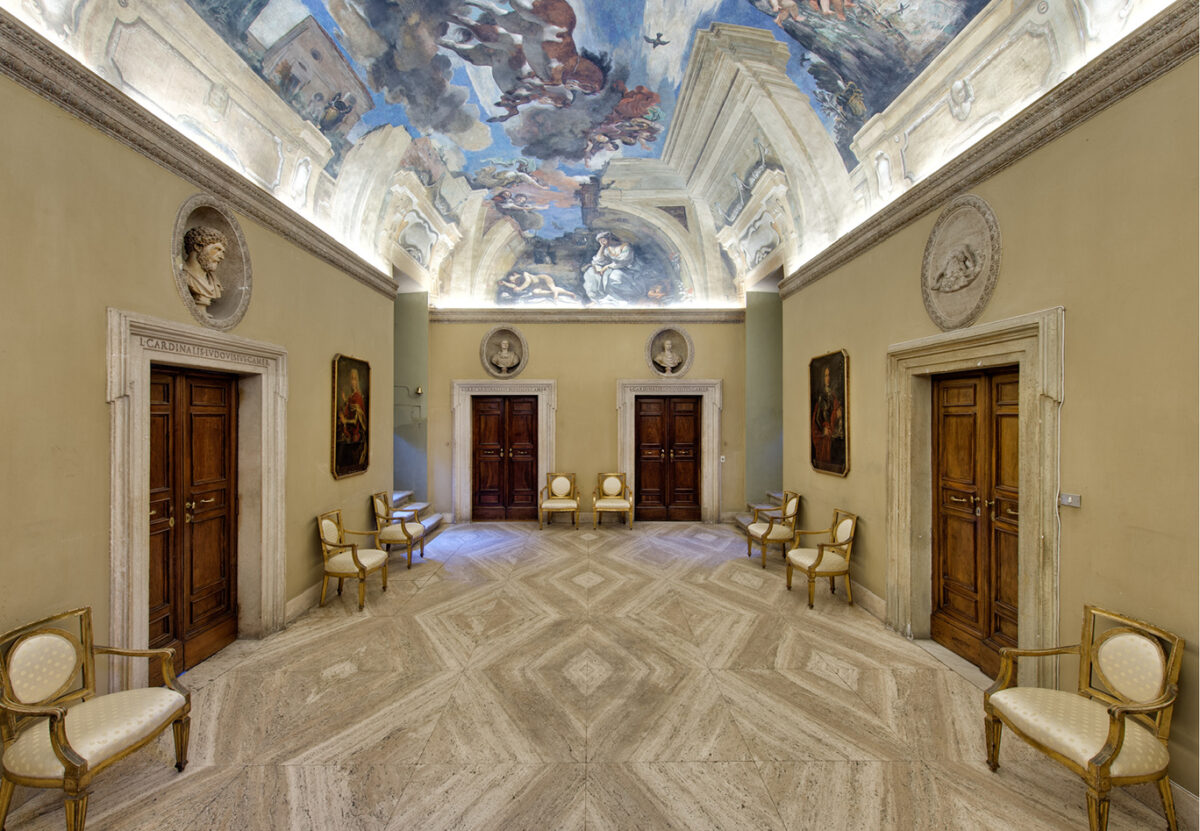 Rome’s serene skies and majestic buildings often serve to heal the wounds of its history. Layers of monuments and ruins hide centuries of struggles and triumphs. Through its many reconstructions, the Eternal City seems to proclaim “Tomorrow is another day”.

The Villa Ludovisi Aurora is a good example. Nestled behind the grand hotels of Via Veneto on the Pincian hill, this little oasis shows few traces of the dramatic events and notable people who have trod its lands.

Yet in 2021 the villa was catapulted into the global spotlight when it was announced that the building, grounds and its unique mural by famous Baroque artist Caravaggio would be put up for public auction. Inheritance wars, art thefts and family dramas were all revealed as attention was drawn to the villa with its asking price of 471 million euros (about $521 million) and a list of… supposed potential buyers from Bill Gates to the Sultan of Brunei.

The ground was troubled from the start. Julius Caesar laid out a fabulous garden on the site, but after his brutal assassination in 44 BC it fell into the hands of the historian Sallust. A gem among aristocratic pleasure palaces, it was burnt down when Alaric invaded Rome in 410. The area lay fallow for over a thousand years until under the new Caesars of Rome, the papal court, new structures sprang up from his ashes.

After arson and murder, a public auction will seem rather subdued, but for Princess Rita Boncompagni Ludovisi, who has called the villa home since marrying Prince Nicolò Boncompagni Ludovisi of Piombino in 2009, it is a death knell. Born Rita Jenrette, the journalist, actress and real estate agent rivaled Caravaggio for notoriety in her youth, until she met her prince.

Rita is reborn in Villa Aurora (named, by the way, after the goddess of dawn). For 12 years she worked to maintain the villa, which was in constant need of repair, putting the site back on the list of great things to see in Rome as it had been during the days of the Grand Tour when Henry James claimed that “There is nothing so perfectly fair in Rome, nothing more devoted to style. Princess Rita often led the tours herself, sharing her love for the history and beauty of the place .

The princess said in an exclusive interview with The Epoch Times, “Nicolò gave his life for this…and for years I have supported this villa with my efforts. After all that effort, she is “heartbroken to see it sold.”

The villa is however no stranger to sudden sales. Cardinal Francesco Maria del Monte, a Tuscan ally of the Medici Dukes, bought the property in 1596 to have it requisitioned for the nephew of the reigning pope. It was returned in 1599, when the cardinal hired Michelangelo Merisi, also known as Caravaggio, to paint his one and only mural on the vault of a small attic bedroom.

Caravaggio, on the eve of his stratospheric success with “The Call of Saint Matthew” in San Luigi dei Francesi (Saint Louis of the French), chose a bold composition: three imposing deities – Jupiter, Neptune and Pluto – seen in the naked in a neat vertical foreshortening. Here, where Cardinal del Monte carried out his experiments in alchemy, whether making gold or observing the heavens, Caravaggio personified the elements of water, air and earth. fire, each accompanied by its respective animal: an eagle, a hippogriff and the three-headed dog. Cerberus. They are arranged around a translucent celestial sphere with the Earth visible at its center. By a strange twist of fate, Galileo would come to the villa a few years later on one of his many trips to persuade the Roman court of his heliocentric theory.

The small room with three giants crowding the vault, all painted with the same dark, scowling features as Caravaggio’s self-portrait, would perhaps be intimidating to many. But for the princess, it is “the room where she does yoga”.

The villa changed hands again when Cardinal del Monte sold it to a new papal family: the Ludovisi Boncompagni of Bologna. From 1621 to today, it has remained in the family, passed down from generation to generation.

The Ludovisi family has expanded the property to an astounding 74 acres spread across Pincian Hill. The cream of Baroque painters left their work in the villa and its sculpture collection became the envy of Rome.

To decorate the entrance arch, the family hired Francesco Barbieri, nicknamed Guercino, a disciple of the famous Carracci Academy. In his first Roman work, he painted Aurora galloping across the ceiling, sowing flowers and dispelling darkness. Like Caravaggio, he used a dramatic bottom-up point of view, demonstrating his exceptional drawing skills. The family enjoyed his work so much that they rehired the Bolognese painter to paint the personification of fame upstairs.

The princess knows these works as if they were old acquaintances. She recounts her discovery that Bernini used to “spend many nights in the Aurora Room playing cards”, and she fumes over the collaboration of Italian landscape painter and sailor Agostino Tassi on the vault, after his notorious rape of the painter Baroque Artemisia Gentileschi. Her tone softens, however, when she says, “I love Guercino. I love the Guercino more than pretty much anything else in the villa.

Since the glory days of the 17th century, the villa has been beset by time and greed. Speculation in the 19th century saw the estate shrink to the half acre it is today. In 1896, JP Morgan considered buying the site for the American Academy. One hundred and four of Ludovisi’s finest sculptures were sold to the Italian state in 1901, but Caravaggio and Guercino remained loyal to the villa.

Princess Rita also discovered another invaluable asset of the villa: the family document archive, a vast sea of ​​papers that she spent 10 years organizing, preserving and digitizing. Working with Rutgers University and the Italian Art Police, Rita managed to recover an 1867 handwritten letter from Saint John Bosco to Princess Agnese Ludovisi, stolen in 2016 “by relatives”. The 150,000 pages of classified documents – from letters from Marie Antionette to a document signed by Pope Gregory XIII, acknowledging the legitimacy of his natural son, Giacomo – are the legacy that the last owners of the villa will leave to the world. .

The loss of the villa is devastating. After the death of Prince Nicolò in 2018, the impossibility of reaching an agreement between Princess Rita and Prince Nicolò’s sons from his first marriage and settling the debt of the estate led to the intervention of the judiciary, which ordered the sale. The first auction on January 18, 2022 produced no bidders and the villa suffered the same fate at a second auction on April 7. The third round, in what has been dubbed the “sale of the century,” will take place on June 30, when the starting price will be lowered again.

The Princess has no regrets about the time, energy and personal funds she invested in the villa, saying: “The only thing that survives is the art and the architecture, … our paintings and our literature from generation to generation.

As Aurora galloping through the villa’s vault knows, no matter how dark the moment, the sun always rises.

A lakeside oasis for art and entertainment